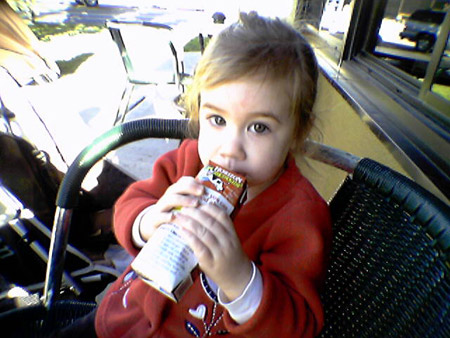 My mother called this morning to check up on the Fart Family — that is one of the things I hold dear in this life, that I have heard the Avon World Sales Leader say fart out loud — and she asked how Miss Leta was doing.

“She’s bipolar, thank you very much.”

“Then from now I’m going to call anyone who is bipolar a big baby.”

My step-father chimed in from across the room in a shiver-inducing Utah accent, “Hay-thur, she is bay-ter be-hayved and more pray-shus then iny kid I hayve ey-ver seen.” Every word in that sentence was pronounced with three distinct syllables. Some had four.

“That’s because she’s lying to you. Jon said the other day that he can’t wait for you to witness one of her fits.”

My mother then told me that I never acted that way, that I never threw tantrums. I don’t know if she was saying that I was a good kid then or just a really bad mother now.

“Jon’s mother said he didn’t throw tantrums either. I don’t get it. Why is she doing this to us?”

I could hear my mother grinning on the other end, the tips of her fingers rapping against each other in victory as if she had been praying for this for years, and she said, “This is God’s way of saying you shouldn’t have left the church.”