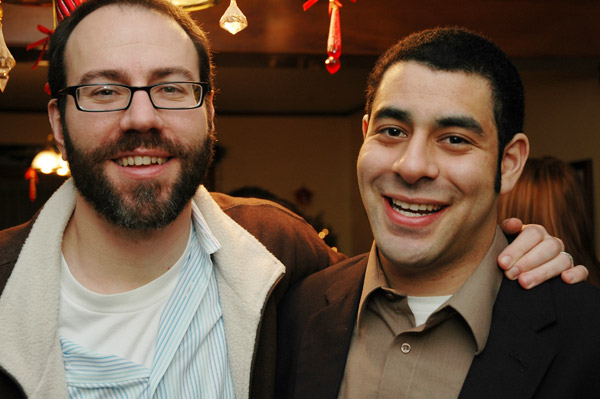 Jon and I recently figured out that of the five years we’ve been together on New Year’s Eve we’ve only been awake for three of them. One of those times I was technically awake but I don’t remember anything other than rolling down the window and puking on the freeway as hundreds of cars sped by at 85 mph a few feet from my head. That was one of my classier moments in life.

This year we promised each other that we’d do our best not only to stay awake but also to stop drinking before our livers just fell off. I say “do our best” because you don’t know when someone is going to break out the ouzo and convince you that one shot isn’t going to hurt and the next thing you know you’re dead. Greeks must have titanium livers because all I have to do is smell ouzo and I won’t remember the next three days.

Jon’s nephew, Tomu, invited us to the cocktail party he was hosting with his girlfriend and roommate, and although we knew we’d be the oldest people in the room by, oh, 10 years (almost 20 in Jon’s case) we decided that the people watching alone would be worth it. Tomu has a twin brother named Jiro — their father is half African American, half Japanese, and the only reason I mention this is because with all of those genes going they still bear an almost eery resemblance to their Scottish uncle, particularly in the large Scottish forehead region. Both Tomu and Jiro were award winning debaters in high school. Now that they’re in college their circle of friends has expanded a bit, but the party was still filled with creative types: the opera singers, the drama majors, and inevitably someone studying the French horn. I turned to Jon at one point in the night and said as if observing the room from the grave, “You know these kids are going to be amazingly successful in life, but they’re going to mess up a lot before they get there. They’re going to experience a lot of pain.”

“Not just pain,” he said. “But very painful pain.”

And then we both sat in silence remembering some of the more awful times after college: the unemployment, the ramen noodles, the pain of leaving the church and hurting family, and more than anyone’s fair share of really bad sex. These kids… they DON’T KNOW how many frightening left-leaning penises they will see in their lives, and that includes the heterosexual men.

After three or four drinks Tomu approached to tell me a secret. “Aunt Heather,” he said like he always does, pronouncing Aunt like an overachieving British school boy with argyle socks pulled up to his knees. “I think I can say that this is the first time I have ever been officially drunk.” As if there is a difference between officially and unofficially, and from the outlandish way he was standing perfectly still and talking in complete sentences I’d say that Tomu has never officially been FUCKING WASTED.

Five minutes later I checked up on him to see how he was handling his official drunkenness and he looked at me like I had just asked him why he was wearing a tutu. “What are you talking about?” he asked.

“What am I talking about? You said not even five minutes ago that you were drunk.”

“Oh, that,” he said as if if remembering something stupid he had done in kindergarten. “In Buddhism we concentrate on catalyzing the alcohol in our systems.”

“It’s like this: I’ve done nothing for the past few minutes but concentrate on the molecules of alcohol in my body and breathing a certain way so that it no longer affects me.”

“Nephew Tomu,” I said. “That’s the craziest thing I have ever heard, but it’s an honor to be related to you. And now I want you to teach me how to catalyze chocolate fudge so that it doesn’t end up on my butt.”