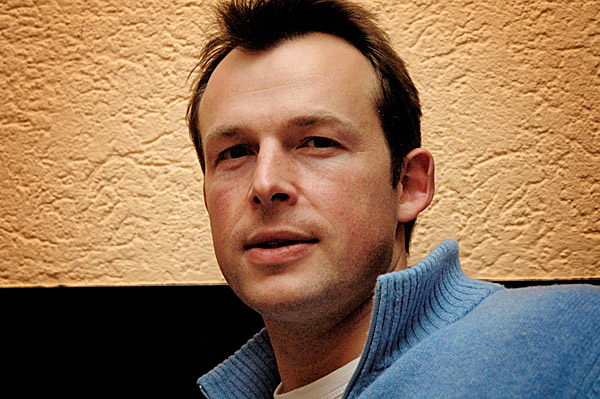 On our final night in Amsterdam we had the immeasurable pleasure of meeting up with the one and only Jaap van der Molen at his house in the city. This is a picture of Jaap at dinner right before he told us that Scarlett Johansson wouldn’t be on his List of Five because her boobs aren’t big enough, at least not as big as the European boobs he’s used to. Which suddenly makes me very frightened of European boobs. [Quick aside number 400: When I was in college I brought in a little extra cash by tutoring Korean students in conversational English. One of my favorite students was a guy named Geyoung who liked to talk about music and pop culture. During one of our lessons I was trying to teach him how to describe women in a flattering way, that they have shiny hair or pretty skin, and I asked him to describe in English what he found attractive in a woman. He struggled for the words and finally shot out, “Legs! And… and… smile! And… and…” After pausing he brought both hands up to his own chest, squeezed his shirt as if he were making fresh orange juice and concluded, “And big blossoms!”]

Jaap is married to a gorgeous woman named Patty and they have two kids, Feline and Tijn, whom they have to carry up three flights of stairs just to go through their front door. They were kind enough to show us how the Dutch live in Amsterdam and after seeing only one room of their house both Jon and I almost fell over from envy. Theirs is a lifestyle we dream of, one of raising kids in the city in a house that overlooks a canal, albeit a house that sits probably 70 stairs straight up from the street. We might have a big back yard but they have a personal gym built into their house.

Jaap joined us for a delicious sushi dinner and then we headed over to our bar for a few beers. I tried ordering a martini from the bartender and by the look on his face you would have thought I was asking him to solve a quadratic equation on a bar napkin. He had no idea what I was talking about so I clarified, “A martini, in a martini glass.” Both Jon and Jaap were embarrassed to be seen with me because there is some unwritten rule that you’re not supposed to order a martini in a beer bar. Excuse me? That is only the dumbest unwritten rule ever. Martinis and beer are perfectly capable of coexisting peacefully, it happens in Jon’s belly all the time.

What we thought was going to be an early night turned into a four-hour beer drinking contest between the two men. In one corner we had a former Mormon who only started drinking after he had qualified for social security, in the opposite corner a healthy Dutch stair-climber whose mother pumped beer from her breasts. Jon had to stop when he couldn’t tell which woman was me, the Heather on the left, the Heather on the right, or the two Heathers in the middle.

Jaap continued until he became Squinty Drunk, that point when you’ve had so much to drink that the level of concentration required to remain upright causes you to squint your eyes. He kept denying that he was even tipsy until he stood up to go to the bathroom, and in a drunk attempt to make everyone believe that he was perfectly sober he took itty-bitty baby steps so he wouldn’t wobble. It took him ten minutes to walk three feet.

When we said our goodbyes Jaap requested that we do it the Dutch way by giving three kisses on the cheeks, one on this side, then one the other, then back on this side. I had no problem keeping up with the pace of his alternating cheeks, but when it was Jon’s turn Jaap grabbed his face and planted a firm wet kiss right on his lips. We had been discussing Brokeback Mountain all night and it was Jaap’s way of ending the night symbolically.

When we got back to the states I sent Jaap an email and told him not to worry if he didn’t remember anything from that night because the amount of beer he consumed might have eaten half his brain. I also assured him that Jon had sufficiently recovered from their lip to lip tango, and Jaap replied, “I remember most of what I said that night and especially kissing Jon. His lips felt like peach skin. Nothing like I had experienced before. You are such a lucky woman!”