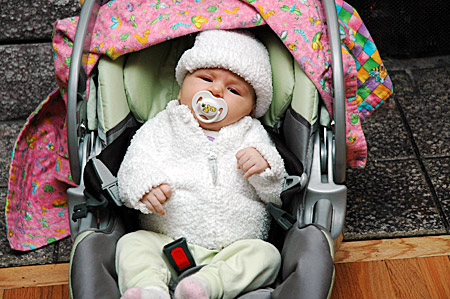 Our friends Pat and Rebecca came over last night to watch the finale of “Project Runway” where we witnessed the future of fashion: DYNASTY!

They brought their almost three month old baby girl, Ruby, who sat in my lap the whole time so that I could smell her head. Unlike Leta who at Ruby’s age did nothing but whine and moan about the injustice of being brought into this world against her will, Ruby sat silent except for the occasional coo and insufferably cute baby toot.

When she did become a little fussy I handed her over to her Mama, and then a half hour later I went to bed where I slept without interruption for eight hours. Sleep, I have discovered, is the cure for the high you get off the fumes from a baby’s head.