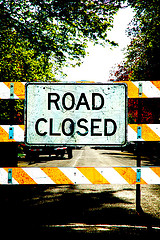 Jon and I are in the middle of our own personal hell as the outside of our house is swarmed with city workers and plumbers and loud machines that have little regard for children’s nap schedules. Our sewer line replacement didn’t begin until Monday morning because certain city permits had to be filed including one that would allow the plumbing company to block off the entire street and dig a swimming pool right in front of our driveway. I asked them if they could throw in a diving board considering how much this is costing us, and one of them scowled at me for trying to make light of such important work. If you ask me, dude takes shit way too seriously.

Jon has been taking notes through every step of this process while I’ve been inside reviewing the finer points of an anxiety attack. I have the excessive nighttime drinking part down, and the incessant pacing while gripping the hair on the back of my head, but I haven’t yet had the chance to throw a heavy object at someone who doesn’t deserve it. I keep waiting for Jon to open the door with a heavy sigh to bring me the bad news that they’ve found something else wrong, that it’s going to cost us more than the incomprehensible estimate they gave us last week, that they’ll take our house plus a down payment of one kidney.

But he says the lead plumber working on this problem is an expert in the field and everything is going as textbook as possible. There is a very sick part of me that feels a sense of pride in the fact that a Sewer Line Expert found objects in our pipe that he had never seen before. You can imagine the things he’s pulled out of the ground during his tenure, he’s an expert after all. Think about all the things you’ve flushed down your toilet: that dead goldfish, an old Steely Dan cassette tape your husband thought he’d lost, a neighbor’s cat.

But until last week he had never been confronted with a seemingly impossible violation of physics. HOW DOES SOMEONE FLUSH A BEACH TOWEL? I have no idea, but for the rest of my life I will brag about the fact that it happened here. Jon posted about everything he’s learned here and here, recommended reading if you live in an old house and like to use a lot of toilet paper (raises hand and feels a bit ashamed considering the relative smallness of my ass, admits it does seem a bit indulgent if not totally unnecessary, but doesn’t want to know if you are the type of person who skimps on toilet paper, that type of information wouldn’t damage the friendship but would definitely determine whether or not we could eat at the same table).