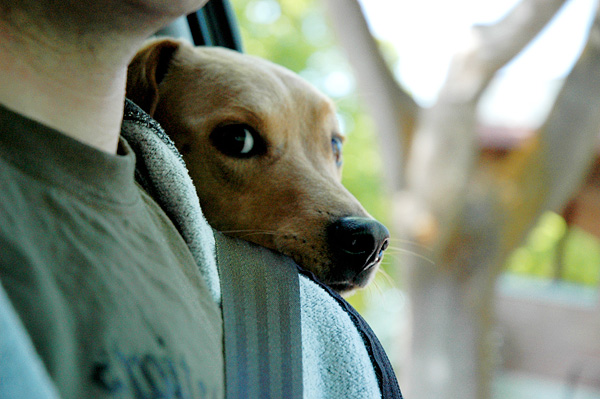 Jon is usually the one piloting the car, and even though he can position his seat as far back as it will go his legs are so folded up into that small space that his knees are parallel to his forehead. When all three of us are in the car together Jon has a hard time seeing out the rearview mirror because of all the protruding elbows and the distracting motion of the passenger to his right dry-humping the glove box. We often pile everyone including the dog into that capsule and drive to the park. Chuck always ends up forcing his head over Jon’s shoulder and pressing it firmly into Jon’s left ear because it’s the only pocket of breathable air left in a car stuffed full of limbs. When we all climb out, one after the other, leg after leg unfolding like a wallet full of pictures, I imagine that we look like a circus family, a freak show. We look like we’re trying to see just how much flesh we can cram into one tiny space, and right in the middle of the program Chuck shoots straight out of the back seat from the space between the seat belt and the floor like he’s being launched from a cannon.