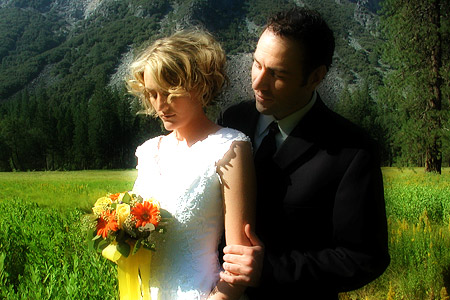 Four years ago today Jon and I eloped at Yosemite National Park. We’ve been pretty good in the past about getting each other gifts, but recent sicknesses and stresses and large medical bills got in the way of things this year. Last night as I served a bowl of tomato soup to my still-very-sick husband I asked if he had done any shopping for this anniversary, secretly hoping that his answer would be no because then I wouldn’t have to feel awful that I hadn’t bought him a gift. Does this make me the stereotypical asshole husband most women hope they never end up with? I think it does. Marriage has turned me into the Insensitive Idiot Male from laundry detergent commercials.

When I was a 19-year-old sophomore in college my roommates and I lived in an apartment complex we called The Retirement Community. The average age of the other college students who lived there was 28, and none of them were married or actively dating. We saw it as some sort of Mormon pasture where the old and unlovable were sent to die alone. I remember a woman we used to go to church with, an incredibly beautiful 24-year-old teacher who had a killer wardrobe and lustrous blonde hair, and we were all scared that we were going to end up just like her, destined to die a spinster in a rocking chair on a dusty porch. I really thought that’s what happened to women who didn’t get married by the time they were 21, that their ovaries immediately shriveled up into hardened pebbles.

Thank God Jon had pity on that old, withered 27-year-old who in her wedding vows promised never to sneak the dog sips of whiskey behind his back. Is the fact that I broke that vow within a week of the wedding grounds for annulment?

I don’t think I’ve ever had any wildly romantic notions of marriage. My parents divorced when I was ten and that whole devastating experience has had far-reaching effects on almost everything else in my life, primarily on how I approach this relationship with Jon. When we got married I had no illusions that happily ever after would just happen — I got that nonsense knocked out of my head at an early age. I knew it would be about working hard to make things work, and then working some more. We would have to be the valedictorians of making it work.

To say that the last year has beaten us senseless would be downplaying it a bit. Sometimes it feels like life is slowly cutting off each of my fingers and then forcing me to watch as it flushes them down the new sewer line that cost us our life’s savings. But every single morning one of us leans over and kisses the other like we promised we would do four years ago, even on the mornings when we don’t feel like it, even on the mornings when one of us would rather punch the other one in the balls.

Each morning we start over again because we want this to work.