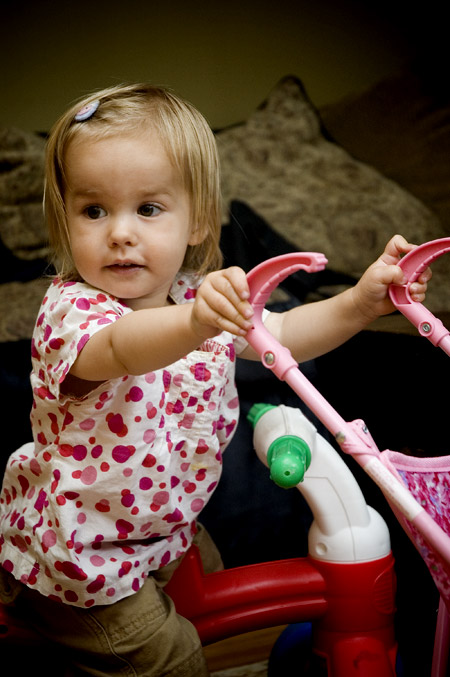 Dutch and Wood travelled across country with their 19-month-old daughter, Juniper, to their new home in Michigan. On their way they stopped by and let Juniper show Leta how to use her many plastic toys: all at once.

They and anyone else who can survive a car trip like that with a toddler have an ability to endure pain that should be scientifically studied and then sold in capsules over the counter. I admire the guts it took to make this trip, especially when at the end of it Dutch still had enough wit to write something as beautiful as this:

“I nearly broke down when a guy pushing a mop in a McDonald’s somewhere in Iowa came up to Juniper and said she was beautiful and said he had two himself, one only nine months old. And I watched him push his mop and I felt so much sorrow and love for this man in a McDonald’s uniform. And I felt so lucky that I didn’t have to leave Juniper in her bed to push a mop in a McDonald’s in the middle of the night. But mostly I felt love for him, and knew that look in his eye all too well when he saw my daughter shrieking with the joy of freed limbs, pushing her happy meal Hummer along the floor in front of his mop. Thinking about his own.”