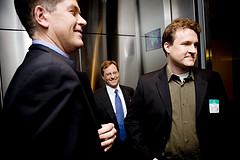 I have finally cleared off the 4 gigs of memory cards I filled taking pictures in New York, and sadly more than half of them are blurry because every time I went to take a photo I kept thinking MUST KEEP MOVING. OR DIE. That city will totally do it to you, make you think that unless you are in a constant state of forward trajectory your lungs will stop working. And so everyone is running around on a small high of caffeine and panic, a feeling not unlike the buzz you get from certain ADD medications.

I also didn’t take as many photos as I would have liked to, primarily because Jon was not with me and I am always inspired by what he shoots and the angles he shoots from. That, and I didn’t have a lot of free time to stop and frame things, and on Saturday when I was walking through the city I was concentrating not on possible photo opportunities but on the throbbing pain shooting up my legs from the blisters on my feet. I wore the wrong shoes, the worst shoes, shoes they use in secret CIA prisons to torture information out of innocent Iraqi bus drivers, and at one point I was bleeding through four bandaids out through the shoe’s leather exterior. So I stopped at Crate and Barrel, hobbled up to the second floor where they showcase couches and bedroom sets, and sat down to nurse my wounds. While cradling my bare, bleeding foot in my lap and rummaging around my bag for another bandaid, an employee walked slowly by me to investigate whether or not I was going to ooze contaminated fluids on the couch’s polyester stain resistant microfiber. I smiled and explained, “I’m not homeless. Just stupid.”

I’ve put together a set pf photos from the CNN shoot, mostly for the guys who were there and didn’t bring their own cameras. The other bloggers you’ll see in these shots are Steven Clemons from The Washington Note, Omar Wasow, the mind behind Black Planet, Chris Mohney, Managing Editor of Gawker, and the charming neoconservative John Hinderaker of Powerline. Plus there are a few shots in there of Soledad O’Brien as well, whose pulsating, heavenly light almost short-circuited the camera.

These are some of my favorite shots: