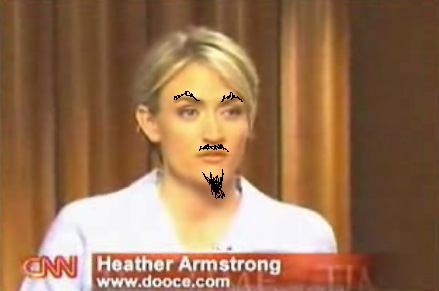 A producer at CNN sent me an email a few days before the last trip I took to New York to tell me that the round table discussion I had taken part in would be airing that weekend. And then, of course, I didn’t read that email until after I had returned from NY, after it had aired, although some people happened to be watching CNN when it came on. The consensus was along these lines: you weren’t kidding about all that make-up! Which is a much better response than I had when I finally watched it, a response that went more like this: that woman’s lower jaw looks as if it is about to unhinge and swallow the camera. I’ve got all these crooked teeth jutting up from my lower lip, and when I watch myself on camera I’m always surprised that I’m capable of speaking in sentences. I keep expecting some sort of husky grunt to roar out of my throat right before I beat my chest with my hairy knuckles.

One of Jon’s nephews found the segment on YouTube a few days ago, preserved so that years from now my grandchildren can look back at it fondly and say, that is my Granny. She collected croutons and hid them under her bed.

(click this screenshot to see the video which has been uploaded to YouTube, apparently, by some very angry people)

Overall I’m surprised by how the segment was edited from a 60-minute discussion into four quick minutes of soundbites. I think every instance that I spoke up and added my voice to the discussion was included in the final package, which is not a fair representation of what I actually contributed to the whole of the conversation. The edit makes it seem as if I was actively involved, but the reality was that I sat there on my bony butt for the majority of the hour trying to avoid eye contact with Soledad, she whose Armani jacket probably cost more than what I paid for my house. Much to my horror, Soledad sent me an email about a month ago to tell me that she had read what I had written on this website about my CNN experience, including the part where I say I don’t think she takes shits. I certainly hope that she didn’t take that sentiment the wrong way, because really? I’m not sure there is a more genuine way for me to say, hey you, I think you’re neat!