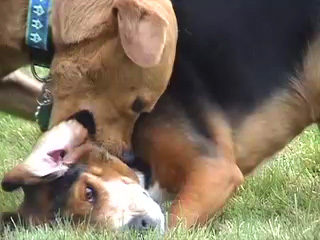 Now that we have returned Bo to my sister, our house is a bit melancholy as it sits in so much silence. My constant little buddy is gone, and my nights now echo with the plaintive ghosts of his snores. Even Chuck is sad, or I guess I should say, sadder than usual, and all of the constant running around and biting Bo’s neck has left him a totally exhausted lump on the floor. So tired, in fact, that when I tried to snuggle with him last night he let me do it, whereas his usual reaction is to shudder and then gag up a hairball.

In recent years Chuck has settled into his old age, and he doesn’t play with other dogs as much as he used to. Except for Bo, that is. And we’re not sure what it is about Bo that does this to Chuck, but Chuck cannot walk by him without trying to tease him or body slam him into a wall. It reminds me of all those times my brother would sneak up on me and stick his wet finger in my ear only to then pin me down and drip spit into my eye. But my brother did not treat me that way because he loved me, no.

He did those things to me simply because I existed. And that bothered him.

I cannot deny the affection shared between these two male animals, and after you watch this video I think you will agree that what they have between them cannot be denied, although the state of Utah would like to think otherwise.