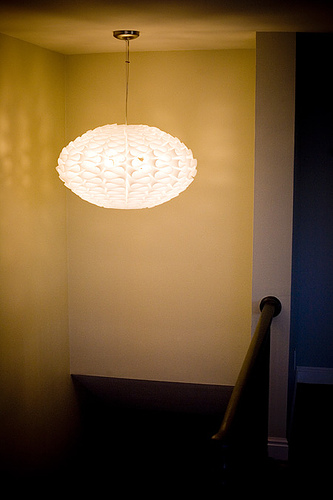 Our unofficial move-in date is Tuesday, this Tuesday, as in tomorrow, and the reason it isn’t set in stone is because all three of us are now sick at the same time. I’ve got that sinus infection, and the two of them have a cold, and I think we’re all having a contest to see who can act the sickest. I am not at all going to go into detail here about who I think is acting the sickest because such an exercise is not going to get the couch and the bed and very heavy dresser packed. In fact, if I were to go into such detail he might just leave all those things for me to move, and then I would have no time left over to moan endlessly about how no one understands just how sick I am.

A few days ago Jon took my cousin, GEORGE!, up to the house to move around some heavy furniture including the brass bed that GEORGE! will be sleeping in for the next few months. While they were there GEORGE! saw the new hanging lamp that Jon and I installed above the stairs last week, the one we put in place of a very traditional chandelier, and GEORGE! stopped, blinked for several seconds in an attempt to take it in, and then declared that it was a little too “hippie” for his tastes. Before I go on I’ll just go ahead and tell you that GEORGE! went home to Texas this weekend to see a NASCAR race. And then you can go ahead and decide for yourself whether or not what GEORGE! thinks is taste is just a missing part of his brain. I’m not sure that hippie would be on the list of the first 100 words that come to mind when I see that lamp, but whatever, GEORGE! is entitled to his opinion. When Jon told me about this incident I asked him to explain to me how in the world he could have described it as hippie, and Jon sort of waved it off and reminded me that GEORGE! was born well into the 80’s. That hippie to him means something totally different than it means to us. Okay. Fine. That’s just a roundabout way of saying that GEORGE!’s definition of hippie is wrong. He just doesn’t know it, and it isn’t his fault, I’ll give him that. It’s his parent’s fault, obviously, for going ahead and having unprotected sex during an episode of “Family Ties” and giving the world a GEORGE! in the first place.

The wood floors are supposed to be finished by tomorrow night at the latest, and after seeing what it looks like in there already I guess you could say we are a little delirious with anticipation: Although that feeling could be blamed on a combination of antihistamines and fatigue and an all new season of “Real World/Road Rules Challenge.” In the last two weeks we have moved probably 30 truckloads of boxes and crap to the new house, and still it doesn’t seem like we have made a dent. Which means we’re probably going about this all wrong, should be moving it all up at once, but there is no fun at all in doing things the right way. We need the opportunity to yell at each other, to berate each other in colorful, demeaning ways, to yell across the house that we have taken shits that could pack a box of dishes better.

Also? Probably not a good idea to cook anything with a bag of flour that you found in the back of your pantry that has an expiration date of 1998. Unless you want to bake cookies for that special someone in your life who has a hard time realizing that, “Honey, I like it when you take a shower,” is the exact same thing as saying, “Honey, I like it when you don’t smell like ass.” I love you, too, HONEY.