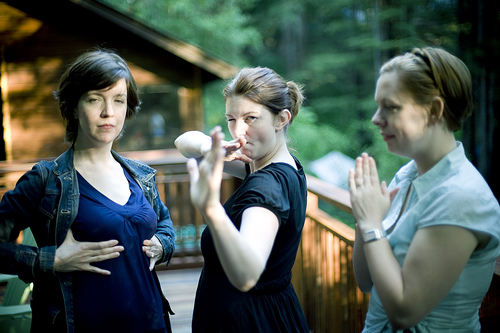 As I look back at the hundreds of photos I took last weekend I am kind of overwhelmed with the notion that I have found such amazing friends through the Internet. I have a few close girlfriends here in Salt Lake City, friends I adore, friends whose hair I would totally hold back from their faces if they ever needed to puke, that type of close friend. But a few of them refuse to read this website and even refer to it as “that thing” or “whatever it is that you do” as if this website is some sort of horrible facial deformity that they are trying not to stare at. It’s like writing this website is no different than pole-dancing, and they are afraid I’m going to start discussing my crotch over chips and salsa.

This weekend I didn’t ever feel like I was going to have to explain my “thing,” and I had no idea that it would feel so refreshing. It was like getting together with co-workers and bitching about the boss, AND I AM VERY GOOD AT THAT if you didn’t already know. Except the boss in this instance was a content management system, or a memory card reader, or that damned application that works on your cell phone but not on mine. We stayed up way too late, drank far too much, and bared a raging geeky side to each other as if comparing scars. Totally hot if you’re a guy who gets a hard-on while hacking CSS.

Sunday night after we had dropped Alice off at the airport, we all headed back to Maggie’s apartment to wind down for the night. We killed a bottle of wine, and I don’t even remember what we watched on television because I was too busy telling the girls that I loved them so much with an Oprah accent, one where each word is emphasized so dramatically that every time she opens her mouth it sounds like she’s introducing God to the world. I loved them so much that they each had a Toyota hidden under their seats.

Maggie headed off to bed with the baby, and while Melissa was getting ready for bed in the bathroom I climbed onto the couch where I was going to sleep. As I leaned down to pull up the covers I accidentally let a squeaky fart ripple across the cushions, and it sounded like voice of a troll who is whining about a hangnail. It was officially The First Fart of the Weekend.

Eden was sitting on an air mattress behind the couch, and before I could look over to see if she had heard it she asked, “Did that just come out of your . . . butt?”

We had shared quite a bit up to that point, tears and hugs and vulnerabilities, but none of us had farted in front of each other. I was totally mortified. “Yes, that was my butt,” I answered.

And as I dove to hide my head under a pillow she started laughing. A totally non-judgmental laugh. And then. Suddenly.

She shared her fart.

I knew in that moment right there that if anything ever happened to me or Jon that I could leave my child with Eden and trust that she would raise my daughter to be a magnificent person. The whole set of photos is here, and I’ll be posting many more throughout the day.