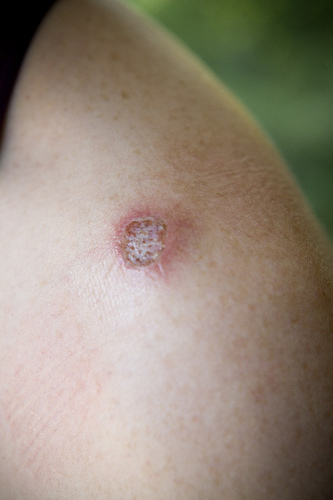 Last night GEORGE!’s 19-year-old friend, Cami, came over with one of her girlfriends, Elyse, to share a store-bought dessert with us. I specify store-bought because Cami is somewhat devout in her Mormon faith and should know at least ten different dessert recipes off the top of her head, and before she is allowed to get married she is going to be tested on her ability to do so. Store-bought just doesn’t cut it, and I’m only giving her a heads up because she’s got maybe two good years left in her before she shrivels up into a useless, bitter spinster. Covered in cat hair.

Cami and GEORGE! spent a day or two together over the weekend, and despite witnessing the horror that is a fresh skin cancer wound, oh wait. I haven’t shown it to you guys, yet, have I? Here, have a look: Those two little idiots spent eight hours in the sun on Saturday WITHOUT SUNSCREEN. And when I saw both of them that night they were in so much pain that they had a hard time walking a few feet without moaning from the burn on their legs and arms. And do I ever know that pain. I know it too well, and because that pain and I are so familiar I am doomed to spend the rest of my life having quarter-sized chunks cut straight out of my flesh by very concerned dermatologists who cannot understand why I did so much sun-bathing in my youth. Why? Because looking like a slice of processed cheese SEEMED LIKE A GOOD IDEA. I saw New Kids on the Block in concert, Doctor, so I don’t think I can over-emphasize the quality of my judgment.

Jon met Cami for the first time last night, and when he saw the lingering redness in her face he made an off-hand comment about how she and GEORGE! were having a contest over who could do the best imitation of George Hamilton.

“Wasn’t he, like, a president or something?” suggested Elise. “Like, I think he signed the Declaration of … something.”

Of something. Yes. That one.

“No, no, no,” said GEORGE! “He was in the Beatles.” Which, let’s be honest, is more blasphemous a suggestion than thinking he was once the leader of the free world.

Jon quickly tried to clear things up and told them that George Hamilton is an actor from the 70’s who is known for his shiny tan, and then he flinched as he realized that the majority of the room considers the 70’s to be the Olden Days.

“Oh yeah!” said GEORGE! “He’s in that Doritos commercial!” And then they all nodded, like, oh him!