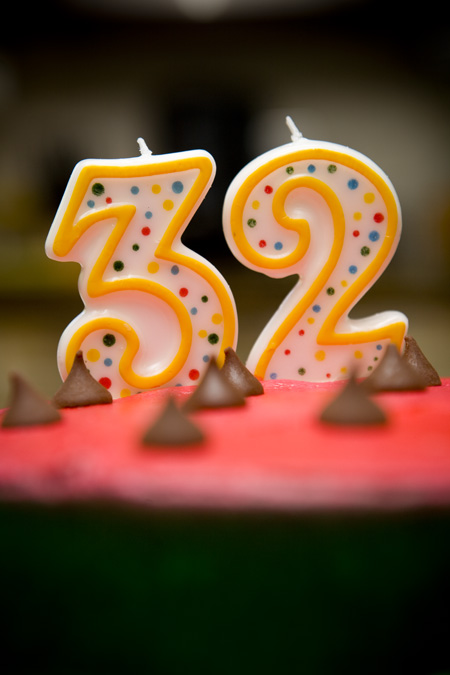 This was the birthday cake GEORGE! bought for me from the grocery store:

It’s supposed to look like a watermelon, and he said he got me this specific cake because of how much I love watermelon? What? I do? I’m thinking this was one of the last cakes they had sitting out at the bakery, and it was either this one or one congratulating me on my recent baptism. So, job well done, cousin!

Those are Hershey’s Kisses sitting on top, arranged to look like the black seeds in a slice of watermelon. And when we were getting ready to cut the cake, I handed one of the Kisses to a very reluctant Leta and told her it was chocolate. She looked skeptical, but then hesitantly opened her mouth and let it sit on her tongue for a second. Right then Jon called me back into our office so that he could show me a desktop pattern he had made for the occasion, a large picture of me and Leta with HAPPY 32 written across the top, and when we returned to the kitchen not even 20 seconds later, all 13 Kisses were gone. Vanished. And Leta suddenly had a brown goatee.

Our babysitter, my sister’s oldest kid, was sitting right there next to her, and when I asked her what had happened, she shrugged and said, “Uhhhh… not sure. I think she ate them.” And then she twisted her mouth into a wrinkle and opened her eyes really wide, like, kids! What are you gonna do!

That expression is only made more amusing by the fact that the last time she babysat, she put Leta to bed with chocolate ice cream smeared all over her face, her hair still in pig tails, and, AND! she forgot to turn off the light. I called her the next day to ask why she had left the light on, and she goes, “I did? Wow. Maybe that’s why it took her two hours to fall asleep.”

There is a good reason why my family always jokes that she was supposed to have been my kid.