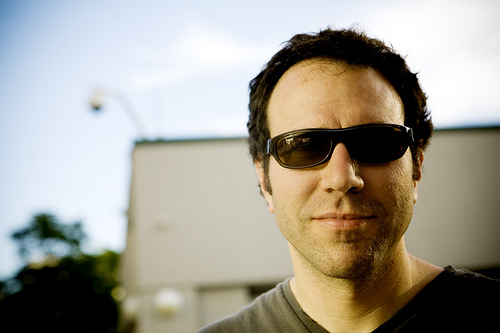 During the first winter that Jon and I lived together in Los Angeles, our apartment was heated by a single, tall gas unit built into the living room wall. Which meant that it got really cold sometimes in the bedroom. Jon was always turning the heater up as high as it would go, and I’d follow right behind and turn it off. Because gas was so expensive, and come on. It was Los Angeles. Winter there is this mythological thing that happens where Santa lives.

When we went home for the holidays that season my mother said that she had this gigantic electric heater just collecting dust in the basement, so we packed it up and brought it home. It seemed like the perfect solution because electricity was so much cheaper than gas, and finally our bedroom would be warm enough that Jon could sleep in something other than his snowboarding pants. You think I’m kidding. But I am not at all kidding. Jon would dress himself from head to toe as if he were about to go fishing on the icecap and then climb in bed, cocoon himself with a quilt, and then lie there and shiver.

So he goes to work one morning, and before I head out to my job at That One Place I take a look at our bills and the state of our checking account. And when I open the electric bill I have to rub my eyes with the back of my fists because what I’m seeing doesn’t make any sense. I even walk away, around the apartment and back thinking that when I look at the bill again it will have adjusted itself to my expectations. But it doesn’t budge, and I am suddenly confronted with the fact that I have just spent $422 dollars in electricity on a 300 square foot apartment.

Obviously what I thought was the electric bill was actually the gas bill, and all those months I wouldn’t let Jon use the gas heater? Oops.

So I call him, and I’m not even sure how I’m going to tell him about this little mix-up, and when he answers I’m all, “I need to tell you something.” And I don’t even remember this, but I guess my tone is such that he thinks I’m about to break up with him. Or confess that I’m gay.

He says, OK, what is it? And I’m so paralyzed that I hesitate for maybe 10 or 12 seconds, and all this does is make him more horrified about what is about to come out of my mouth. And I guess at this point he is over there in his office with this head in his hands, his mind scrambling to figure out how he’s going to piece his life back together.

Finally I muster enough guts to admit it. “Please don’t be mad at me,” I say, “but I think I may have been confused about the gas bill.”

“What do you mean?” he asks, which is not what I wanted him to say because it means I now have to expound for at least a sentence on my stupidity, and I do, I tell him everything, including the part about how that stupidity has turned out to be really expensive.

Jon brings up this story all the time because of the profound anguish I put him through during the first 20 seconds of that phone call, and for what? An electric bill. If you were to spend an hour hanging out with us, this is exactly what it would be like.