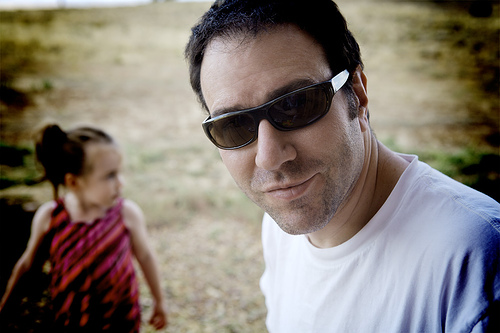 Five years ago today I eloped with this man on a cliff at Yosemite National park: To celebrate we saved up some cash to buy a gourmet coffee machine. Those of you who are single might not know this, but the quality of a cup of coffee can sometimes be directly proportional to how much you can stand to be in the same room as the person you’re married to.

Except, today, the actual day of our anniversary, that new coffee machine is sitting on the countertop in our kitchen 100 miles away, because yesterday we decided to drive out to my mother’s cabin in the middle of the high desert. And celebrate our anniversary with festive woodland creatures: Jon and I debated over whether or not we should pack up the coffee machine and bring it with us to the cabin. My Mormon family does not drink coffee, and if we didn’t make arrangements we’d be going three or four consecutive days without coffee, which would mean three or four consecutive days of not speaking to each other. But the new coffee machine is similar in size to a six-drawer dresser, and there just isn’t enough space in the cabin for that kind of appliance. Not with my mother’s massive collection of farm animals dressed up like George Washington.

So we bought some artificially flavored “coffee house beverage mix,” the kind of thing you scoop into a cup of hot water. And it’s not so bad, although it’s a little sweet and has no kick whatsoever. Also, it doesn’t look at all like coffee, which is a bonus because that means we don’t have to try and explain to my nieces and nephews why we would so voluntarily drink the Tears of Satan.

One of my sister’s six-year-old twin boys watched intently as Jon drank his first cup this morning. “Are you drinking hot chocolate?” he asked.