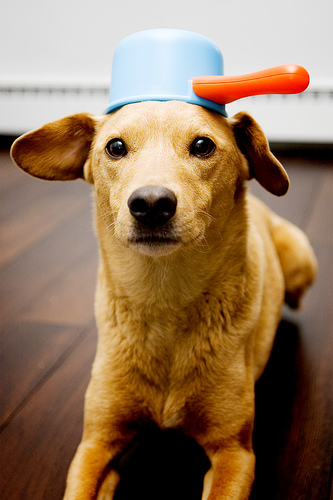 When Jon and I travel we always leave Chuck at the same kennel, a sprawling warehouse where all the employees treat the animals as if they were their own. Chuck loves this place and can tell when we take a specific exit off the freeway that this is where we’re going. And during the ten minutes that it takes to get from that exit to the kennel, he will cry like a newborn baby while frantically hopping from the left window to the right window in the back seat of the car, which translates from canine to English as ARE WE THERE YET? ARE WE THERE YET? ARE WE THERE YET? Pets are much easier to take care of than small humans, but if you’re thinking about having kids and wonder what it will be like, you might want to get yourself a dog to prepare yourself for some of the more minute details, like learning to stop yourself from reaching around and smacking the thing in the back seat that just won’t shut up.

This most recent trip to San Francisco was scheduled so that we had to leave Chuck at the kennel for eight consecutive days, the longest he’s ever had to stay someplace else. We had originally planned to pick him up last night when we returned home, but our plane was two hours late, and by the time we collected our baggage and rode the shuttle bus back to the car, the kennel had closed for the night. So by the time we picked him up this morning he could not have been more deliriously tired, having spent almost nine days on alert with dozens and dozens of other dogs, pining for the moment he would once again get to skulk down into the basement to sleep for 22 hours. When I walked up to the window that looked into the main holding area he spotted me immediately, ran up to make sure it was me on the other side, and then started galloping proudly in circles, like, mine came back! Mine came back!

Chuck is never happier to see us than when we return from traveling. He’s not the type of dog to greet us at the door when we return from running errands, or to wag his tail for us when he sees us first thing in the morning. But when we’ve been gone for several days in a row he will always show a dramatic display of appreciation that we didn’t decide to go away permanently, like he suddenly realizes, oh, they have the option of leaving me somewhere forever, and they chose not to. How cute of them.

Today was no different. He was thrilled to see us, ran a few laps in and out of our legs to demonstrate this, and then when we got to the car he leaned his body longingly into my leg. That’s a combination of signals: one, I missed you, and two, please don’t make me jump up into this car because I might die. So I picked up his exhausted body, climbed into the front passenger seat, and let him hang his floppy ears out the window the entire ride home. Usually he can’t get comfortable in this position, will give up, hop into the back seat and want nothing to do with me, but this morning he settled into the curve of my arm and rested his head on the lip of the window. It was his little present to me: in exchange for coming back, he would act more like a dog and less a balding, disgruntled humanities professor who hasn’t been laid in four years because his clothes smell like mothballs.