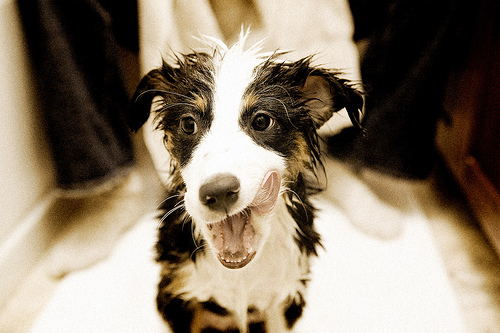 Just now I leaned around my monitor and said, “Jon, you’re going to want to see these pictures of the dog.”

He looked at all five of them, shook his head silently and asked, “Why do I want to kill her?” We’re slowly getting used to the idea that a dog lives in our house as it is very different from living with a mopey cat-deer. I took both animals to a dog park the other day, and Chuck as usual was determined to meet and inspect every dog and person, and then mark every blade of grass not covered in a foot of snow. But Coco was interested in none of that, and she spent the entire thirty minutes we were there making sure she knew where I was and what was going on around me at all times. In fact, she herded dogs away from me. I kept motioning for her to go play, go burn off that insane puppy energy that wakes her up at 5 AM and causes her to cry, not because she has to go to the bathroom, but because she’d like to get a head start on all those backward somersaults she wants to throw off the bed.

And she just looked at me like, what? Play? But I’m working. This is what you pay me to do.

So we have these huge windows in our living room that look out onto the street in front of our house, and if we let her she would stand there all day, her front legs perched up on the sill, barking at every passing car. But then it’s not just cars, it’s the menacing garbage cans, and the neighbor walking on the sidewalk, and the dead leaf that just blew into our yard. They are all potential dangers, apparently, because the pitch of her bark and the way she runs around charging the empty air in front of her, it’s like she’s sounding a fire alarm and we’re all supposed to hide in the basement until she has determined that we’re all not going to die. Isn’t that thoughtful of her?

But we don’t let her stand there all day because that would mean we might have to walk into the other room like we accidentally did this morning, and she would be left there alone for half a second. Do you know what you can do with that amount of time? I haven’t tried this yet, but get this, you can run downstairs to my bedroom, hop up onto my side of the bed and pee a gallon of water on my pillow. And then roll your entire body in it. Yes. Yes you can.