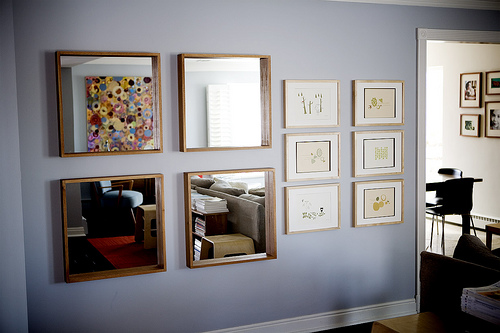 In sickness and in health, through the irrational demands of a wife who regularly struggles with obsessive-compulsive disorder: the Armstrong marriage survived another home improvement project. Maybe because he’s been taking Prozac, or maybe it’s because of all that HOT HOT SEX, but when I told Jon what I wanted the wall to look like, he said something like, why aim for perfection when approximation is so much easier? Which is the most romantic thing that has ever come out of his mouth, so I pushed him down on the floor and ripped off all his clothes.

We could have bought all sorts of different tools and spent hours making templates to make sure that everything lined up perfectly, but instead he held up one mirror while I stood back ten feet. And then he moved it up and down per my estimation. From there we eyed everything else armed only with a laser level, a pencil, and one sturdy hammer. And so what if one or two frames are a few centimeters out of alignment? WAIT, DID I ACTUALLY JUST WRITE THAT? Is this what therapy does to you? Turns you into a person who can walk by a crooked frame without reaching out to correct it? Why not just save a little money and smoke pot every morning?

We were originally going to print out six photos, but I realized that I had a whole bunch of illustration prints tucked away just waiting to be placed in permanent homes, so we hung the prints instead. Potential problem: we had already hammered nails into the wall to hang the frames horizontally, and three of the prints that I wanted to hang were intended to hang vertically. Solution: pretend not to notice. So three of the prints on the wall are hanging THE WRONG WAY. And I’m not kidding, just now when I wrote that my left nostril flared to the size of a grapefruit.

Is it just me, or is this post starting to feel like a painful, awkward confessional? Internet, I once cheated on a high school science test. In college I let a boy touch my boobs. Two years ago I stole salt and pepper shakers off a table at a fancy restaurant. And I have only repented for two of those things. The third thing was so much fun that it didn’t feel right to say I was sorry.