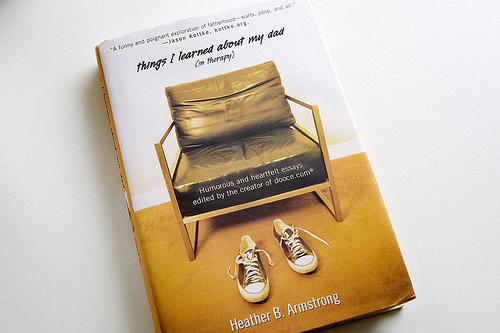 There was this one time when I asked a whole bunch of people if they would help me put together a book, some of them close friends, others whose work I had admired for years, and I remember one exchange in particular when this one guy said SURE! and the excitement I experienced was not unlike what I imagine it would feel like to impregnate Angelina Jolie myself.

That book comes out today: It’s called Things I Learned About My Dad (in therapy) and it’s a collection of essays about fatherhood from the perspective of fathers, wives, daughters and sons. I’ve written two of the 17 essays, one about my father and one about Jon. A few weeks ago I gave my father an advance copy of the book with the hope that he would read what I had written, but I didn’t say anything to him other than HERE IS MY HEART AND SOUL, DO WITH IT WHAT YOU WILL. I found out a week later that he had taken it home and used it to prop up a wobbly toilet. I like to think that I improved his life by those two inches.

The other authors are Kevin Guilfoile, Matthew Baldwin, Matt LaPlante, Alice Bradley, Doug French, James Griffioen, Greg Allen, Greg Knauss, Maggie Mason, my hot geek husband Jon Armstrong, Leah Peterson, Sarah Brown, Eden Kennedy, Gail Armstrong, and my man in Houston, Bill Farrell. I am eternally indebted to these people for their hard work and cooperation and for making this book such a spectacular collection of emotion: humor, sorrow, frustration, joy, and forgiveness. I won’t say which, but one of these essays completely transformed me, and I’m a better person for having read it.

Starting today the book is available at the following retailers:

On Thursday June 5 I’m going to be doing a signing at a local bookstore called The King’s English on 15th East in Salt Lake City. I’ll be sure to post more specific details as that date draws near and would encourage everyone to come and say hello even if you don’t want to bother with the book. I haven’t ever done a local meet and greet and thought this would be the perfect occasion. But be warned, I am known to bite. And suddenly break out into song.

I don’t think the publisher is sending me anywhere to do press or signings, but I’ve had a few requests from readers who wanted to know if they could send me their copy so that I could sign it and then send it back to them. I’m more than happy to do this as long as you include return postage (please send it to the address on my contact page), and what the hell, I’ll tuck a little extra something into the envelope. I promise it won’t be gross. Maybe.

Finally, I want to thank my editor Danielle Chiotti whose name should be right next to mine on the cover of the book given how much work she did to get this thing out the door. She is a superhero, and I can’t thank her enough for hanging in there with me. Also, my agent Betsy Lerner, who has been my tireless advocate for over three years. She has suffered endlessly, and I owe her a beer.

I CANNOT BELIEVE THIS IS OVER, THANK GOD. Fly, little book, fly!