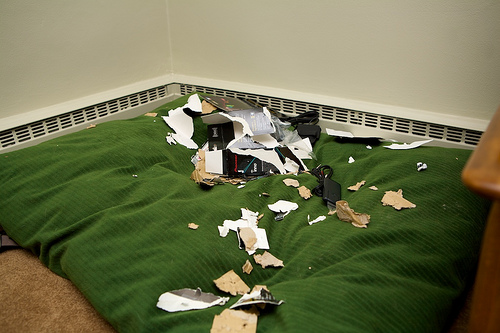 During the first few months of Chuck’s life he had a habit of chewing on anything that would fit in his mouth: the remote control, Jon’s flip-flops, my underwear. We hired a trainer who taught us how to make him stop, and the technique worked, but that doesn’t mean I’m going to share that technique here with you NO SIREE. People get all weird when your dog training techniques don’t match up with their dog training techniques, and next thing you know someone’s brain has exploded all over their monitor. But not before they’ve sent off an email to tell me I’m doing it wrong.

We remembered this technique vividly and used it to make Chuck wary of curbs, and thus wary of running into the street. It’s a proven technique, totally humane except for the occasional beating and emotional abuse, HA HA JUST KIDDING. Dog’s have no emotions, SILLY! So we thought we’d use the same strategy if Coco ever developed a habit of chewing on things that ought not to be chewed on. Except, I don’t know if I’ve ever pointed this out or not, but Coco has a screw loose. I’m not kidding. There is something wrong in her head. Her brain is not intact. And a technique that made Chuck never want to look at a remote control ever again, made him run in the other room and go, DUDE, I BELIEVE YOU, this technique has zero effect on Coco. In fact, when we employ this technique you can almost hear the lone cricket inside her head crawling up to her ear to yell out: THERE’S NOTHING IN HERE. LET ME SLEEP.

So she’s got this problem, this really annoying problem, and it goes like this: MUST CHEW TISSUE ALWAYS. It’s not a separation anxiety issue because she does it when we’re in the room. She does it in the five seconds we’ve taken our eyes off of her, in the two seconds it takes me to turn around and shut the door after letting her inside. If Coco is not in the room, it’s a pretty rock solid assumption that she’s doing this:

This one is my favorite. It almost looks like she mistook it for an apple:

And then tonight she claimed victory on a battle she has been waging since the afternoon we brought home a dog bed from Costco several months ago. She penetrated the bed’s outer core, grabbed hold of its internal organs, and systematically gutted it:

Jon has thrown up his hands and has instead embraced the beauty of Coco’s obvious artwork. She’s an installation artist, and toilet paper is her medium. And I don’t know, if you’ve read my website for more than a couple of years you’ll totally know what I mean when I say that this pretty much means she was sent here directly from God.