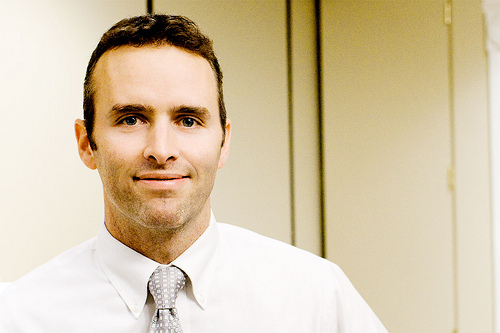 Was it Monday night? Tuesday? I don’t remember, this week has been nothing but a blur with things toppling sideways and the surreal becoming even more surrealer, or maybe it’s surrealier. How about sureally? I LACK THE PROPER ADJECTIVE. That is now going to be my answer when someone asks how’s it going: I LACK THE PROPER ADJECTIVE. Like, something awful has happened, let’s say, a loved one has died! And you say to yourself, Self! Take a deep breath! It’s going to be okay! Except on the way home from talking to yourself, you lightly tap the back end of a car being driven by a raging asshole who immediately calls 911 and tells the cops he’s paralyzed.

Not that this happened, but even if it did, I LACK THE PROPER ADJECTIVE.

I think it was Monday night that we attended my Granny Boone’s viewing, and there I reconnected with hundreds of cousins I haven’t seen in years including Nate, son of my mother’s brother Lewis: Nate is just a few years older than I am, is happily married with five kids, but none of that matters, and that is not why I’m bringing him up. Sure, he’s cute and beyond charismatic, and you want him at your party even though he doesn’t drink. He’s the type of person who would strip naked and knock on your grumpy and spiteful neighbor’s door in the middle of the night, not because he’s drunk or because you offered him money to do so, but because the retelling of that story might make someone happy. He’s like Human Prozac.

There! I FOUND AN ADJECTIVE! Wait, that’s not an adjective, that’s a metaphor. No, a simile? Whatever, THAT THERE WAS LITERARY, DAMMIT.

Okay, so Nate was around during the first visit I ever took to Utah, the first time I ever saw a mountain IN MY LIFE, back when I was an awkward fifteen-year-old, all elbows and knobby knees, back when I weighed ninety pounds soaking wet and the kids at school nicknamed me Skeletor. And my hair, oh dear Lord, an unruly thicket of curls that hung all the way to my waistline, messy, frizzy and caked with cheap styling mousse I’d buy at Walgreens. These details are important, I assure you, I’m not just writing them here to make myself uncomfortable, although it sure worked!

Nate was being a gracious host and giving my brother and me a tour of Snowbird Ski Resort. It was late August, so everything was green, and all the runs looked like huge bald spots scattered across the mountain. Around one curve we spotted a lingering patch of snow about as tall as a house several hundred feet up from the road. And Nate was all, OH YOU GUYS! YOU GUYS! Let’s go skiing!

Let’s go skiing? DUDE. THIS IS THE FIRST TIME I HAVE EVER SEEN A MOUNTAIN. But this was Nate, you see. The nude door-knocker, Nate. And to him this was the best idea he had ever had. Let’s take someone who has only ever seen this kind of terrain in that one Robert Redford movie and throw her in with the wolves. A story is just bound to come out of this!

And that is exactly what happened: a story. Because when I hiked two hundred feet up to the top of that snow patch, I took one look down the side of the mountain and was all NUH UH. NO. NOT EVER. And as I stood there shaking my head, Nate hopped with both feet right into that snow and skied IN HIS SHOES to the bottom of the hill, remaining upright the entire time. You see, he grew up surrounded by mountains. Me? I grew up surrounded by trailers.

So he’s standing there at the bottom of the hill waving his hand in an effort to get me to try it, and I’m not even looking at him. I’m gingerly walking sideways down the hillside beside the snow patch, trying not to trip on any rocks, when he cups his hands around his mouth and yells, “IF YOU RUN YOU’LL GET DOWN FASTER.”

A declaration no different than, “IF YOU AIM THE GUN AT YOUR HEAD YOU’LL BLOW YOUR BRAINS OUT.”

And I don’t know if it was the word RUN or FASTER, but something caused my left foot to disengage from my brain, and next thing you know I am tumbling head over foot down the side of the mountain. Like you might see in a cartoon. Bony elbows flying up and over knobby knees up and over a wad of hair that resembled a giant tumbleweed. I am certain that for the one hundred and fifty feet that I fell and fell and fell down that mountain that my brother and Nate could not make out was was rocks and sticks from the outline of my body. Like, wait? Where is she? Is that a bush or her head? Wait! There! I think I see an arm! Oh wait, that’s a twig!

And then I landed, no joke, I am not even kidding, I LANDED IN A THORN BUSH. Face-first into a thorn bush. Seriously? I couldn’t just fall down a mountain? I had to land IN A THORN BUSH! (Imagine me shouting that while making jazz hands. I’m just saying.)

Wait! That’s it! I FOUND IT! Life right now?

IN A THORN BUSH!