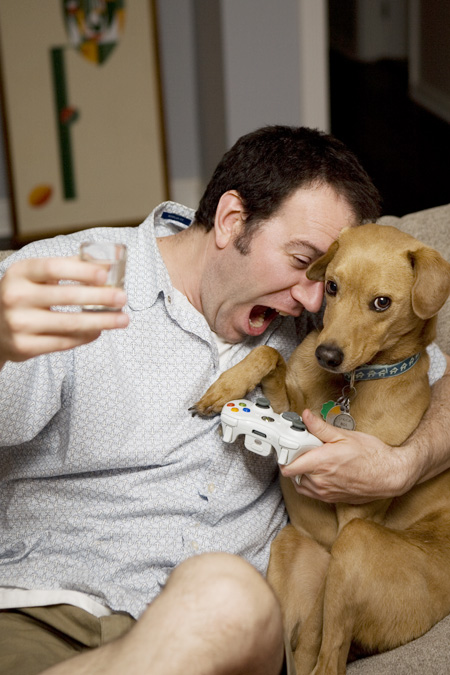 So. Today is a bit of an exciting day around here because Microsoft has given me five Xbox consoles to give away to my readers, just in time for the holidays. And I’ll just go ahead and get the disclosure part of this out of the way: this is a sponsored giveaway. I do not do this sort of thing very often. Actually, only once before (and trust me, it drives my ad network totally nuts. Hi, FM!), but this seemed like something you guys would be really interested in and, hello, FIVE XBOXES. FOR FREE.

I’ll admit that all I knew about an Xbox before about a week ago was that my cousin GEORGE!, the one who lived in our basement for the summer of 2007, had one running at all times in his room. Along with three other gaming systems, two computers, a television, the ceiling fan, and who knows what else because our electric bill the first month he lived here was four times what it normally was. Oddly, he thinks it was that electric bill that has caused the rift that now exists between us. But it’s not. That rift has to do with something entirely unrelated to that electric bill, and because I’m not going to get into that mess here, I’ll just give him a two word hint: TOPLESS INTRUDER.

Fast forward to last week: we wanted to know as much as we could about the Xbox before we gave one away, so Jon went out and bought one, plus a few driving games as those are really the only ones I like to play. And he got this really awesome one that rewards aggressive, dangerous driving, and the more poles you hit and crashes you cause, the faster you hit that ramp and fly 70 feet into the air and land on top of that taco truck, the higher your score. Which to me is what Heaven will look like.

Have I ever told you about how I bought a brand new Honda Civic in 1999, and within the first five months of owning it I had to get the brakes replaced? Not because the brakes were defective, BUT BECAUSE THAT’S HOW I DRIVE. Every day I earn points by stopping closer and closer to the car in front of me, and sometimes I can get it down to millimeters. Just ask Jon and the gray hair in his beard.

As part of this giveaway Microsoft wanted me to share my “Ultimate Staycation” with you guys, and don’t worry, I just punched myself in the face for even writing that word. If they had asked me to use the word “solutioneering” I’m not so sure I could have mustered the strength.

And well, I get to live my ultimate staycation pretty much every day. Meaning, once we put both the kids down for the night, Jon and I curl up in bed with the two dogs, a cocktail, and an episode of either really excellent television or really awful television, the stuff in between is too boring. Like, either an episode of “The Wire” or something about plastic surgery gone horribly wrong. I suppose watching the sunset behind the Eiffel Tower in Paris might be an amazing way to spend an evening, but COME ON. You should see some of these nose jobs.

I think this may be Jon’s idea of an ultimate staycation: So. Here is how this thing works, and no, I had nothing to do with these rules so don’t scream at me:

3. You must read these rules.

4. Five commenters will be selected as winners. Please include your idea of an “Ultimate Staycation” in your comment, and y’all, keep it clean even if it does somehow include your balls.

Note: you must be signed in to leave a comment. If you sign up for multiple user accounts and try to enter under different profiles, you will be disqualified.

7. Winners will be announced on Friday.

PS. Here are the Xbox avatars we created for ourselves complete with my trademark grumpiness: