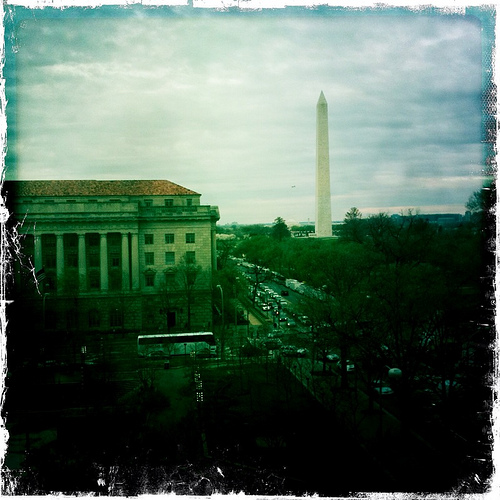 So I get a call yesterday at about 11AM and the guy is all WHITE HOUSE! ARE YOU INTERESTED?! And as much as I would like to tell you that he had a New Jersey accent, sadly, I can’t. He didn’t. How incredible would that have been, though? The guy that calls from the White House going IS YOU READY FOR DIS?

Of course, I said. Why yes, I’m interested, how did you know? Was it the Obama sign we had glued to our window in 2008? Was it my husband’s many incoherent and at times hostile twitters? (I apologize now for all those he may have referred to as a “freakburger”). Was it the deafening cheers you heard from this side of Salt Lake when health care reform passed? No, none of that? Then I’m going to guess Rahm Emanuel got that letter I sent him on pink, perfumed stationery. The one I kissed with my glittery lipstick. The one Jon signed, “And me, too, sweetheart.”

I’ve been invited to participate in a White House Forum on Workplace Flexibility, and they told me I might want to hold off saying anything until they had completed my background check. Because no telling WHAT they mind find that I haven’t written about in way too much detail here. No, really. Too much information. Heather, stop. STOP NOW. HEATHER. No one wants to hear about your episiotomy, HEATHER.

Seriously, I get invited to the White House, and he’s all NO BURPING, NO FARTING, AND BY ALL MEANS, WOMAN, DO NOT TALK ABOUT POOP IN FRONT OF THE PRESIDENT. Well then, why did he call?

And thoughts of unpaid parking tickets (none) or maybe forgetting to tip a server (never) keep popping into my head. I can see it now: “We heard from Stephanie at Chili’s. She says she brought you five Diet Cokes and you left her nothing. How could you?”

Oh, wait! What if they find out about those two unpaid parking tickets from BYU that my dad paid for me. So that I could get my diploma. Well then, THEY AREN’T UNPAID, NOW ARE THEY?

(Reminds me: Dad, I owe you forty bucks.)

If they find something in the next day you can count on the fact that I will report every detail here, and be all OBVIOUSLY I DON’T REMEMBER, I WAS HIGH. Except not, because I can count on one hand the number of times I’ve been high in my life, and I remember every single thing I did during every moment, including thinking that I had stolen a bottle of steak sauce from The Smithsonian because I thought it had expired a thousand years BEFORE CHRIST. I turned to my Jewish boyfriend at the time and yelled HOW THE HELL IS THIS THING STILL LIQUID?

I will take notes in my head, as good as it is after all these years of living without repenting, and you can actually follow along with the live webcast. I’m hoping to bring a few perspectives to the table, having been broke off my ass and living in my mother’s basement, to being a stay-at-home mom with a husband whose workplace wanted to ignore the fact that people have families, to starting my own business, hiring employees and managing their needs, and trying to find the right balance between the time I spend working and the time I spend with my family, a line that gets blurred probably too frequently.

Anyway, here’s hoping the background check goes well. SHHH, EVERYBODY! Don’t tell them about the time I got fired for this website!