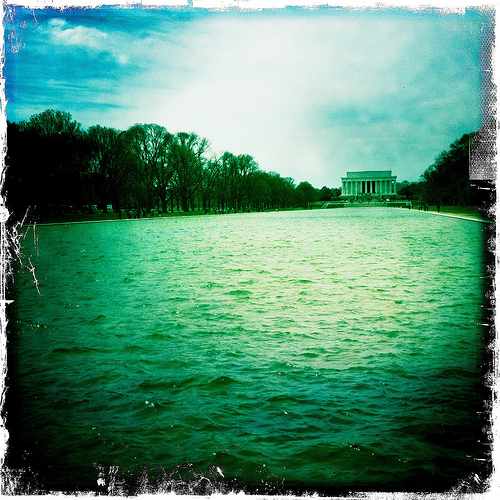 I arrived last Monday evening into DC at about midnight, and when I opened the door to my room at the W Hotel I should have headed straight to bed. Instead, I spent an hour in the tub, a giant marble-topped wonder, and gnawed every one of my fingernails down to my knuckles. I could not get that background check off my mind. Not because I’ve ever committed a crime, but who knows what they consider suspect now? Her dad owns a gun! Her husband is descended from polygamists! HER DAUGHTER EATS NOTHING BUT CHICKEN NUGGETS.

There are government campaigns against that type of diet now. When I end up in prison for it I’m going to be all AWESOME. It’s your responsibility to feed that kid now. And when she goes four days without eating they’ll free me because FINE. THEY GET IT NOW.

That tub was just one of the many exquisite details of a hotel room that now ranks at the top of my list of best rooms away from home. I wrote about the decor for the blog at HGTV, and because this was a last minute trip I didn’t bring our good camera. All I had was my iPhone. And when I attempted regular iPhone pics they looked like crappy iPhone pics. So I used the Hipstamatic app thinking I’d go for a more artistic look. And now there exists one of the best comments ever left on something I’ve written:

Is this the ‘horror movie’ filter in Photoshop? This is ridiculous.

I don’t know why, but that comment smacked my funny bone and I haven’t stopped laughing since. God, I love the Internet.

Tuesday morning I spent several hours getting some work done, and then I spent the afternoon walking around with my iPhone snapping photos. I’ve been to DC a few times, and I always end up at the National Mall. I know, that’s not very adventurous of me, TRY SOMETHING NEW, ARMSTRONG. But that’s like saying I should eat the broccoli beef platter when my favorite dish is the coconut curry. I came here for the coconut curry, THANK YOU VERY MUCH. This way I will not leave disappointed. And look! I won’t spend the entire evening berating you!

And lo, the coconut curry was very good: Ok. Wednesday. The big day. One thing to keep in mind: The W Hotel is about a block away from the White House, but I was going to have to walk up a block, then across the entire length of the Treasury building and the White House all the way over to the Eisenhower Executive Office Building, and then back down the block to the entrance. That probably makes no sense to you so here’s a diagram: I guess I could have walked the other way, now that I look at that map. But that would have been reasonable. Whose website is this?

This kind of trek calls for sensible shoes, right? But how many times in my life am I going to be in the presence of The President of The United States? NOT VERY MANY IF EVER. In fact, the odds of ever being in his presence again are telling the notion of sensible shoes to go right ahead and suck it. Those are five-inch platform heels by Michael Kors. Hooker shoes? Absolutely. Appropriate? Of course not. But I get the feeling that the people who invited me know EXACTLY whom they invited and are going to be disappointed if I don’t show up in a clown suit with a giant python draped around my neck.

I have worn these shoes once before, but I never left the building and took them off after only an hour. So just picture me walking along Pennsylvania Ave, my head locked forward, my eyes shooting concentrated lasers on objects fifty feet ahead, this refrain being repeated over and over in my head: DON’T DIE. DON’T DIE. DON’T DIE.

More than once a tourist would walk a little too close to me, and after wobbling and regaining my balance, I bit my lip so that I wouldn’t shout DO YOU NOT SEE THESE STUPID SHOES? ARE YOU TRYING TO KILL ME?!

You guys, I made it all the way! I did it! I WALKED IN THOSE SHOES! I’m almost as proud of enduring that kind of pain as I am of giving birth without an epidural. In both instances I thought the agony would never end and that I might punch someone in the groin.

So I get there and I’m standing in line with all the other attendees, and you’re not going to believe this, but I was the only one wearing purple tights. I KNOW.

And I meet former Senators and people who work for Rudy Giuliani and someone from the Department of Labor, and then someone goes, “And you work for?”

Oh, I work for! I’m a worker! For the working! WORK to the FOR! FOOOOOOOOR!

Even though I’d been anticipating the question, I hadn’t come up with a good explanation. Because when I say, “I own a small business,” they ask, “What kind?” And I say, “The small kind!” It’s the truth!

Because when it gets to the part where I mention BLOGGER, people inevitably take a step backward as if I am covered in warts. I see it in their eyes! WHAT IS SHE GOING TO SAY ABOUT ME?! Because I think some people still associate BLOGGER with ROGUE! With WILD WEST! With THIS PERSON SPENDS HER ENTIRE DAY WITHOUT PANTS ON.