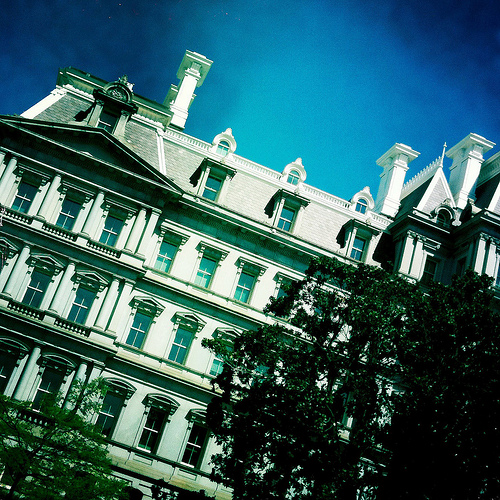 So. Purple tights and Official Rogue Blogger. Well, someone sort of said that to me, don’t remember who it was, but I think their exact words were, “So you’re the official blogger of the group.” And they said it as we were filing into the building, so I didn’t get the chance to respond, “Yes. And your sex tape is scheduled to be posted this afternoon.” And you better believe I’m going to leave comments open. I could start every paragraph from here on out with, “And it was just so surreal.” I kept having to knock myself into real time to soak it in, but there I was walking to the Eisenhower Executive Office Building with all of these other people in expensive suits, and right inside the doorway was this set of pictures: I may have blurted out I VOTED FOR THAT GUY! Okay, I did. I said that out loud. And when I looked around to get a HELL YEAH! I heard crickets. And a tumbleweed rolled past the open doorway.

I expected to have to survive a gauntlet of security checks, maybe be patted down by a litany of men in black suits, but getting into the building was FAR easier than boarding a plane to Las Vegas. Like, I didn’t even have to take off my shoes! And believe me, I WANTED TO TAKE OFF THOSE SHOES.

A few winding corridors later and I find myself at the door of the auditorium where I check-in, stick my name tag on my dress and step inside the door. Just then a voice from over my shoulder says, “Ms. Armstrong, you’re there in the front row.” The wahhh? Are you talking to me? Are you somehow confusing me with Lance? Perhaps Louis? Okay, Neil. Neil has got to be here somewhere.

And remember, I’m trying to stay in the moment, trying not to topple over. So I turn toward the open fan of seats in the auditorium, shake my head to focus my eyes and I see that the front row has been reserved for about 20 people. And my name is on one of those seats. And it was just so surreal.

And as people start filling the room, some of them at this point familiar with why I’m here, I see a few of them look at me in the front row, look at the open seats behind me, and then do an actual double take. Oh yes, my friend. Purple-tighted, pantless blogger is in the front row! Did the world just turn upside down! How did she get in?! Who is in charge here?! DEAR LORD, DOES SHE HAVE MY SEX TAPE?

Now, trust me. If there had been cell service or wireless Internet access, I would have been documenting this process in real time. But I think they had some sort of special government block on the whole thing, because I could not get a damn signal. Or maybe that was the special Rogue Blogger Block. Oh my god, I’m a conspiracy theorist! Anyway, blah blah blah, I sit there for a half hour as people network and laugh with exaggeration, and then after a brief intro by Valerie Jarrett, Senior Advisor to the President, Michelle Obama walks onto the stage. Okay. Fact: I voted for her husband. Fact: I have always considered her a classy and strikingly attractive woman. Fact: Of course I’m going to be blown away simply by being in a room where we share the same air.

Truth: I was not prepared at all for the feeling that came over me when she walked into the room. I was not expecting to be so stunned. There was just something about her presence in the flesh that knocked the breath out of me, and I immediately got a rash of goosebumps up the side of my arm. A totally involuntary reaction, one that surprised even me. You can watch her entire speech here at WhiteHouse.gov. But my favorite part was this:

As the parents of two beautiful young daughters, [workplace flexibility] is an issue that is particularly important to me and my husband, as you know… and it is true in our current life we are incredibly blessed. We have amazing resources and support systems here at the White House that I could have never imagined. Number one of them is having a grandmother living upstairs. We all need one of those. So can you figure that out?

(She motions her arms to the people gathered to figure this out.)

But we didn’t always live in the White House, and for many years before coming to Washington, I was a working mother, doing my best to juggle the demands of my job with the needs of my family, with a husband who has crazy ideas.

And as I’ve said before, I consider myself as many of us in this room do as a 120 Percenter. Which means that if I’m not doing something at 120% I feel like I’m failing. And I know you all can relate to that.

So while I did the best that I could at work and at home I felt like I wasn’t keeping up with either one of them enough. And I was lucky. I had understanding bosses, I had very accommodating jobs. In fact, in the last job I had before coming to the White House, I remember this clearly, I was on maternity leave with Sasha still trying to figure out what to do with my life, and I got a call for an interview for this position, a senior position at the hospitals. And I thought, “Okay, here we go.”

So I had to scramble to look for babysitting, couldn’t find one, so what did I do? I packed up that little infant, and I put her in the stroller, and I brought her with me. And I prayed that her presence wouldn’t be an automatic disqualifier. And it was fortunate for me that number one, she slept through the entire interview, and I was still breastfeeding, if that’s not too much information. And I got the job.

But, I know that I was lucky, number one. I was interviewing with the president who had just had a child himself and was very understanding and open-minded, but I know that most folks are no where near as lucky as I was. Particularly right now with the job market the way that it is, many folks can’t afford to be picky about the jobs that they take. Many folks don’t have access to any kind family leave policies whatsoever, no flexible working arrangements, many people don’t even have a paid sick day. So they are struggling. Struggling every day to find affordable childcare, or someone to look after an aging parent which is becoming more the issue. Scrambling to make things work when the usual arrangements fall through. All of us have been through that.

I had a hard time not standing up after that last part there applauding and whistling like a mad woman. Like, perhaps, maybe, a blogger who is rogue. Or like someone who had such a violent case of postpartum depression that she wanted to commit suicide every day, and her husband wasn’t allowed to take a sick day or they’d write him up.

President Obama is a force to be reckoned with when it comes to public speaking, no question, but you can quote me when I say this: Michelle Obama is better. She makes you feel like you’ve met with her for a cup of coffee, and she’s talking to you like you’ve known each other for years, since that fourth grade teacher who used to wear polka dot suspenders every day and you’d both laugh about it during recess.

She’s straight up: Here’s what we’re facing. Here’s what needs to happen, but I can’t promise anything. Although, you can trust that I understand. And I won’t ignore it.

And then when she was done, she shook everyone’s hand who was on stage, walked down in front of the audience two feet away from me and into her seat on the front row. And she sat there with us through the next 45 minutes of the first session of the forum. Without the Secret Service surrounding her. I kept expecting a team of suits to come in and rescue her at any moment, but when it was over and we all stood up to separate out into groups, she stood up with us. No, wait. Let me write that again: SHE STOOD UP WITH US.

And you know how cool Washington likes to play it, right? Nothing fazes anyone in Washington! Whatever, rest of the country, WE MAKE THE RULES (and can be bribed to bend them, for the right price). We see the White House every day, you Mid-Western peasant, BE GONE!

It’s kind of like Hollywood this way. Like, you’re sitting in a restaurant when Cindy Crawford walks in, and no one turns a head or bats an eyelash because that would be so uncool. Because everyone in that restaurant has written a script or operates a camera or runs errands for a production company. Except, four people have pooped their pants, and everyone else is going OMG OMG OMG Cindy Crawford is ten feet away. I WONDER IF SHE’LL HAVE SEX WITH ME.

Michelle Obama stood up, and I saw the entire room look around at each other, sizing up who was gonna do it first, because everyone wanted to do it, but how uncool would that look? PSHAW! The First Lady lives ten minutes from my apartment! We share the same laundromat!

And then BOOM! She was besieged. Twenty people swarmed her. I was still waiting for the Secret Service to break things up, but she stood there alone, graciously, talking and shaking hands, smiling and making everyone feel at ease. I felt incredibly lucky to be in the presence of someone who could teach me so much in just a short time. And as I walked by in my five-inch heels, she stood only a few centimeters shorter. So, yeah. SHE IS ALL THAT.