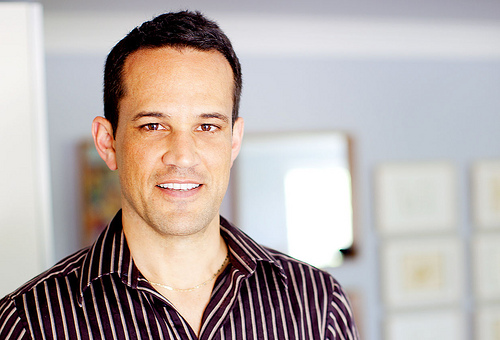 A few months ago we needed to hire a new assistant, and through a friend we met someone who fit every requirement and then some. Internet, meet John: Yes. There are now two people in this house who go by that name, and so to avoid any confusion I refer to my husband as Armstrong. I refer to John as Tyrant.

Don’t let that smile fool you. Yes, he is lovely and friendly, but he was hired to keep things in order, and BY GOD, do not get in his way. His sense of order has totally transformed our lives, and sometimes it gets in the way. A few weeks ago he told me that I should cut back on going to the gym because it was getting in the way of The Schedule. How was I going to get all my work done if I’m over there playing around on the treadmill? And I was all, PLAYING AROUND? You think I’m out clowning around with rubber boots full of tequila, handing out condoms and kazoos? BUDDY?

YOU go maintain an eight-minute mile for sixty minutes and then come back and give me all the delicious details on that party. BUDDY.

Already he has caught on to and likes to exploit some of my weaker personality traits, mainly the one where I will believe anything. And startle easily. To the point that when he walks into the room I grab a helmet. Hey, Heather, your baby just fell down the stairs. Or, hey, Heather, Coco just ran outside and bit a small child. Or, hey, Heather, I think I hear a tornado siren.

And then I have a heart attack and everyone laughs.

He’s very good at this, and sometimes I team up with him to try and startle Armstrong. Like that one time I had him come into the office and say, very loudly, that there were two scary looking people at the door asking for dooce. And we waited for Armstrong’s paranoia to explode, moving quickly out of the way so he could grab a bat. But Armstrong just sat there completely unaware, consumed with something online. It just so happened to be a day when Apple was announcing something.

BAD PLANNING! Tyrant, we’ll have to try that one again!

So, I know some of you are like, why does Heather have an assistant? A blogger needs an assistant? Does she hire someone to wipe her ass, too? And I could sit here and try to tell you how crazy it is over here, that every hour of my life is scheduled into discrete increments and that at times it feels like we’re all walking a tightrope. Because this blogging gig isn’t just pajamas and hand jobs.

Although that part is nice.

But really, it’s just like any other small business. Same story. And having Tyrant around has made us realize just how badly we’ve needed him and his influence. He’s a life changer. And no, you can’t have him.