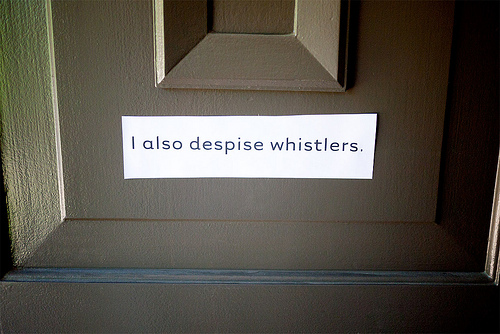 After I put up Sarah’s guest post on Monday, member Brea commented that the whole spontaneous, earnest singing thing bugs her as well, and then went on to say, “I also despise whistlers.” That was one of those things that hit me right in the funny bone, and I whispered it under my breath all day long and laughed audibly every time. And upon reflection, that is probably the creepiest behavior ever. Like I’m responding to the voices in my head out loud. And snickering about it like a thirteen-year-old boy who just masturbated to a poster of Hannah Montana.

It was like that one time Jon and I were headed home from dinner, driving below the speed limit because we were trying to soak up every last minute of being away from the kids. When this crazy chick walks out into the middle of traffic out of nowhere, and five cars have to brake, and there’s screeching and blood and mangled hair goes flying, and she stops right in front of our halted car. Right there in the middle of the road! And she makes the angriest face at Jon as if Jon had been put on this earth specifically to kill her. Sorry, crazy chick. He was put on this earth specifically to put money in Steve Job’s bank account. Not nearly as noble.

And in that split second if you had looked around at all the cars that had screeched to a halt you would have seen the shock. So Jon rolled down the window, stuck his head as far out as physically possible and yelled, “Well then get out of the road, yah dumb bitch!”

And he didn’t know this until I had stopped laughing an hour later and told him, but he yelled that whole thing in a Southern accent.

Not his finest moment, no. But whenever he does something really absentmindedly, AS HE IS WONT TO DO, I’m quick to refer to him in those exact terms.

My point after that giant tangent was to say, you guys, Tyrant is a whistler. An unabashed whistler.

Let that soak in for just a second, because it gets worse. I know you didn’t think it could, but it does! Because he doesn’t whistle songs. NO! HE JUST WHISTLES.

HE MAKES IT UP AS HE GOES ALONG.

So it’s not like you could hum right along with him to the tune. Because you have no idea what note is coming next. NEITHER DOES HE.

I remember the first time I asked him, I was like, dude, I can’t figure out what you’re whistling. And could you please stop. And he goes, what? A song? Who whistles songs?

I mean, right? It’s like, who eats food? Who gives birth to children? Who prays to God?

So I decided that if he can get creative with the printer, then so can I! So I made a little friendly sign/reminder and taped it to the front door: