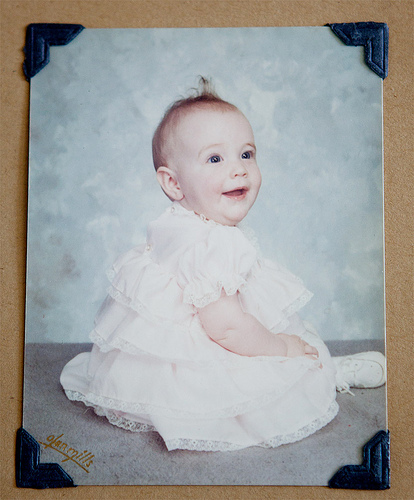 Today you turn four hundred and twenty months old. Yes, this means you’re old enough to have gone insane and are now writing letters to yourself. If the twenty-two-year-old Heather could see you now, she’d fall over from embarrassment. And in that case, please kick that twenty-two-year-old squarely in the stomach. One, she’ll recover much more quickly than you would now. And two, she needs to prepare for the pain of childbirth.

So, what do you have to say for yourself? Well, I think the first thing is, you don’t feel like you’re thirty-five years old. You just don’t, and as that number gets higher each year you get more confused as to why you still feel like you’re in your late twenties. This is called senility, and it means that eventually you’re going to end up in a bed where a nurse has to carry out your pee in a plastic bowl while you scream, “WHATEVER HAPPENED TO SOUL ASYLUM?”

I think you should be proud of yourself, even though right now, this second as you’re writing this letter, you totally feel like shitting your pants. You and Jon just made one of the hugest life-altering decisions of your marriage, and because the dust around this decision hasn’t really settled just yet, you are trying to hold it together moment to moment. More than usual even, and that’s saying a lot since usually you guys wake up and either someone has broken a limb or one of the dogs has dissolved into a four-foot puddle of diarrhea in the kitchen.

You’re married to your soul mate, have given birth to two of the most amazing daughters you could have dreamed of, and all of you have your health. The dogs follow you around the house. You own a home. A dream home. You own a car that doesn’t need any work. Not only do you and your parents still speak to each other, you adore and admire each other equally. You and your sister who have really nothing in common talk to each other on the phone almost every other day. You’ve got an amazing set of friends, many of whom you could call in the middle of the night if you needed anything. You have food to eat, clothes to wear, and a giant bed to hold you at night. Not to mention the fact that you’ve published a New York Times Bestselling book.

You write a website whose audience saved your life.

You’re damn lucky, and I know you work hard because you know just how lucky you are. You probably work too hard at times, and the balance between that drive to work and the need to give more attention to your immediate family eludes you, and maybe that’s the most important reason I’m writing this to you. Because if I take a step back and look at you as a friend and listen to what worries you and gnaws at the back of your brain, it’s not whether you’re good enough at what you do professionally, it’s whether or not you’re living up to what your own mother meant to you.

You have a lot to work on. Mainly, patience. Mainly, letting go. Mainly, releasing the urgency that twists and turns your daily life into knots and stern words and eventual heartbreaking apologies. Because if you make it another thirty-five years, you’re going to look back and want to kick this incarnation of you in the stomach, or at least shake her by the shoulders. You must stop more often. Your kids will never be this age again, will never babble incoherently, will never look at you in total seriousness and say, “But the chore board is boring. I just want to spend the money I would have made if I had done the chores.”

Calm your life down.

I know you’re working on this, but I want you to work harder. I need you to work harder. Don’t let the day-to-day limb breaking or canine diarrhea or the deadline after deadline after deadline get in the way of living the memories you want to create. That’s the wise old thirty-five-year-old speaking to the out of her mind can’t get a moment’s peace thirty-five-year-old who just needs a bit of a nudge, the one who used to babble incoherently herself. Love,
The woman who is going to want to kick you in the stomach in thirty-five-years

PS. HOLY SHIT. After what happened today, maybe this isn’t your fault! Maybe you just attract this kind of chaos into your life! I bet you can’t wait to tell this story!