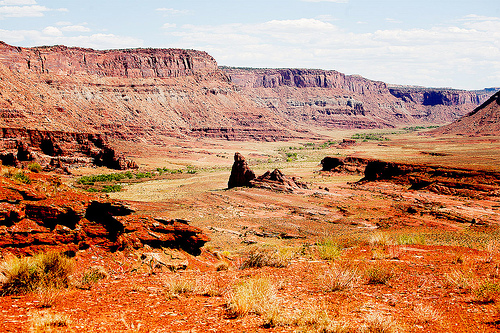 Jon and I left Friday afternoon for a three-day break from everything. From children, pets, broken boilers, squirrels with good aim, and even the Internet. Well, I stayed off the Internet, and Jon did the best he could. Meaning just enough that I didn’t have to nag, twist his nipple, or tell him to please put down his phone and look around: We’d both been through Arches National Park before, so we decided to try some other activities: first, four-wheeling up Cane Creek Canyon to Hurrah Pass. And it was fun, yes, at least for the first couple of hours. And then the jiggling of my organs rearranged everything so that my bladder was sitting at the bottom of my throat. And at that point Jon was rocking out, swinging his fist around his head and screaming HOW AWESOME WAS THAT TURN THAT THREW YOUR BLADDER INTO YOUR THROAT? HOW AWESOME?!

This went on for another four hours. I suggested that while I enjoyed sharing this experience with him that maybe next time he should call up one of his brahs.

I got him back the following morning, however, when we fulfilled a longtime dream of mine: horseback riding through Moab. I’ve only ever been horseback riding once, and that was, what, sixteen years ago? And it was midnight horseback riding with my college roommates where the ranch people didn’t even give us instructions, and all of us just wandered aimlessly in the dark wherever the horses wanted to go. And that included through trees so thick that one of us hit a branch and flipped into a ditch.

We were too busy laughing to sue.

That’s the thing I remember most about that night, the uncontrollable giggling. I couldn’t stop. Every time my horse would start to gain speed I would start laughing so hard that I couldn’t sit up straight, so I had to lie forward and hug his neck so I wouldn’t fall off. And I’m sure he loved that, some wiry-haired, bony-butted loon clinging for dear life to his neck, giggling like a drunk hyena into his ear. Except I was drunk on life! And the prospect of obeying the commandments so perfectly that when I died I’d get my own planet! Mormon tangent!

So Sunday morning I warned our private tour guide, Brandon, that I was a giggler. That there was a good possibility I’d laugh the entire way. Also, Jon hadn’t ever been on a horse. Ever. Not a single time in the whole forty-five years of his life. ALSO! And this was the most important part: neither of us has a functioning filter. So he should not be worried that we’re on the verge of divorce no matter how much yelling occurs between giggles and having to pick that forty-five-year-old man off the ground to put him back on the horse. My horse’s name was Cisco. Jon’s was C.D. We never learned if they were boys or girls or one of each, so there was a lot of GOOD GIRL! and GOOD BOY! and IT WON’T GO ANYWHERE! going on. And I was able to contain my giggling, at least until the guide was confident enough that we could handle a gentle trot. Because that’s when Jon, whose horse insisted on remaining at least twenty paces behind us, would start going OUCH OUCH BALLS BALLS BALLS. I really want to put on a leotard and tap dance to that song: Ouch! Ouch! BALLS BALLS BALLS! Except the shoes would be outfitted so that the tapping sounded like a galloping horse.

Turns out it can hurt to ride a horse if you have a penis! THE LEARNING! Brandon showed Jon a few ways to decrease the impact on his parcels, and things got better for Jon from there. But not before my horse stopped and took a shit at least four times. He or she or it would just suddenly stop, no warning, and next thing you know dude is groaning, and seriously. More learning: horses groan just like humans when going number two.

And then it stopped and peed another three times. It was totally ridiculous. And I was like, the only thing left for Cisco to do is have a baby out here on this trail, and believe me, if it starts hinting that the contractions are getting closer I am hopping of this thing and running for cover. I’m an animal lover and all for nature and whatnot, but I get queasy when Jon calls me into the bathroom to show me the huge wad of brown snot he just blew into the sink. I don’t think I could handle a horse placenta.