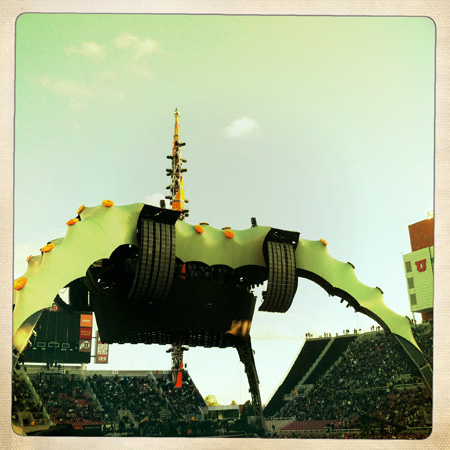 Tuesday night Jon and I attended the U2 concert here in Salt Lake City. I know that the previous sentence is the exact opposite of exciting, but for the both of us this event was something we had dreamed about but had resigned ourselves to the idea that it would never happen. Does that make us lame? Probably, but you know what? Lame is totally underrated! I’ve been a fan of U2 since the mid-Eighties, and here’s where it gets totally sappy and you’re going to want to grab a wipe because the goo is going to get all over your hands and in your hair and then you’d have to explain that to your mom.

At the end of my senior year in high school, after my boyfriend broke my heart, I was faced with the idea of my future. Just a few months away from leaving the town I was born and raised in, off to college, and then where? I used to lie on the floor of my room listening to Achtung Baby, over and over, and I’d think, “I wonder what the guy I’m going to marry is doing right now. What does he look like? Where does he live? What will our life be like together?”

Fast forward to a gorgeous Tuesday night in 2011 and I was standing with him, my husband, father of my two girls, hand in hand, listening to those same songs being performed live. I cried through half of the concert.

During other half of the concert I jumped up and down, pumping my fist in the air to the rhythm, annoying the ever loving hell out of everyone around me. YES. I AM THAT KIND OF CONCERT GOER. But COME ON. They played “Sunday Bloody Sunday” and “I Will Follow” and “Mysterious Ways” and “All I Want Is You” and “With or Without You” and “Where The Streets Have No Name” and if you are the type of person who could just sit there reverently with your hands in your lap during all of that then I will pay for you to get laid. But THEN. Then came the encore and they played “One” and all of a sudden I am seventeen years old and I’m lying on the floor of my bedroom wondering what my future will look like. And who I’m going share it with. Considering all the therapy Jon and I have been through in the last year and the breakthroughs we’ve achieved, there couldn’t have been a more transcendental moment to signify how much we want to be together. And be there for our two girls. This is my future.