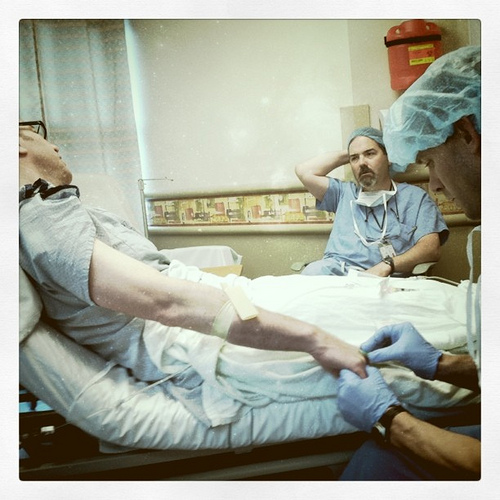 I am right this second sitting in the waiting room outside the surgery wing at a local hospital. A few minutes ago I watched a resident wheel Jon down the hall toward the room where he would be put under anesthesia to have his gallbladder removed. Did you guys know they won’t let us keep it when it’s out? I asked, because, you know, KEEPSAKE, and the doctor was like THERE ARE LAWS AGAINST THIS BECAUSE OF PEOPLE LIKE YOU. What kind of people am I? It’s not like I’m going to do something illegal with Jon’s gallbladder, how is that even possible? You can’t smoke it and get high, right? I just want to dehydrate it and pin it to a linen-lined shadow box. And then print out a vintage-looking label that says, “GALLSIES! JUNE 2, 2011”

Hang that piece of handmade artwork in the entryway, and BOOM, I’m an honorary Mormon.

(Wait, I was baptized into the Mormon church which technically means I’m still a Mormon. OH I HOPE MY BISHOP DOESN’T FIND THIS WEBSITE.)

So, yeah. It’s his gallbladder. That’s been the problem this whole time. A few weeks ago he got a hida scan (a nuclear imaging procedure that evaluates the health of one’s gallbladder), only after he demanded it from his doctor who wanted to wave the whole thing off as a sore muscle. I’ll repeat that: A SORE MUSCLE. If sore muscles feel like a heart attack, then I’m having a heart attack in my hamstrings RIGHT NOW THANK GOD I’M ALREADY AT THE HOSPITAL.

Because that’s what Jon’s been feeling like since January. Like he’s having a heart attack, all the time. All day. And it’s taken this long and this many tests and this many hospital bills to figure out the problem, yet, do you know how common this is? Once we found out the diagnosis it’s like every person who has ever had their gallbladder removed has appeared in my life to say, “Oh that! I had MY gallbladder removed and wow! I no longer feel like I’m having a heart attack!”

My uncle! Cami’s mother! The woman next to me on the treadmill! My chiropractor’s secretary! YOU, probably!

And yet, Jon had to beg for the test. And you know what that test showed? That test showed that while normal gallbladders perform some function at the rate of 35 or higher (some technical/medical gibberish for how it’s supposed to work), Jon’s was barely managing a seven. They were like, WHOA! DUDE! I bet you feel like you’re having a heart attack!

(If ever there were a punch-to-the-ballsack deserving moment.)

So, here we are. Gallbladder surgery has apparently come a long way in recent years, meaning they no longer cut open your entire abdomen and gut all your intestines or something like that. Two incisions. Minimally invasive. He’ll recover for a couple of hours here and then I’ll take him home and rub his head and let him watch episode after episode of “Top Gear” and I won’t tell him once that he’s acting like a total baby. And then maybe he’ll wake up tomorrow or the next day without feeling like he’s dying.