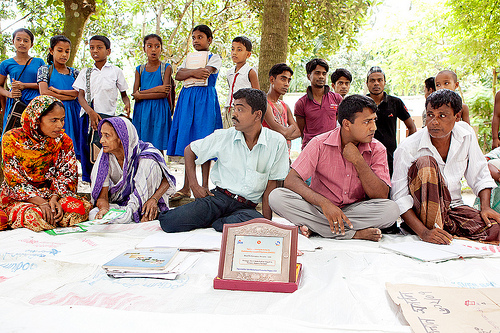 In the early afternoon of Sunday, June 19, I sat with my legs crossed on the ground in a rural village in Narshingdhi, Bangladesh. I was in a circle of about fifteen men and women surrounding a giant hand drawn map of the village which they use to keep track of women in the community who are pregnant, those who have delivered, and those who are most at risk. Two men in the group had lost their wives to childbirth. Another man had lost his son. When we asked what had inspired them to organize this group one man spoke up and our translator said, “Two years ago they learned that women did not have to die when giving birth. Before then, they did not know there were options.”

Parked next to the group was a bicycle with a make-shift wooden platform on the back. It served as their ambulance in case of emergency. We met two women who had complications during childbirth, women whose lives were subsequently saved by that bicycle.

After visiting with them for about an hour Christy asked if they had any questions for our group. I thought that if anyone had ever heard of Peter Pan then they might be wondering why he was visiting their village. Or, are eight-year-old blonde boys usually that tall in America? I will own that I look a bit strange, especially in a rural village in Southeast Asia.

Fine, I look weird in Utah, too.

One of the men who had lost his wife asked desperately, “Please, how can you help us?”

We all sat for a few seconds in uncomfortable silence, and then I turned to the translator and said, “Tell him that the first thing I can do is tell their story. Tell him I will bring their story to as much of the world as I can.”

So I’m keeping that promise. I’m telling everyone who reads this that change can happen. That’s the first thing I can do. I know I was asked to go on this trip because this is what I can do. I can bring awareness. But even in the few days that I’ve been home I’m hearing criticism that this notion, this idea that awareness does anything, is offensive. And if that is your opinion then I invite you to visit Narshingdhi, Bangladesh to share your insight with the man who lost his wife during childbirth.

What else can I do? I could get involved with CARE, the organization that helped train this group to understand the signs of what makes a woman at risk during pregnancy. But apart from that, there’s not much I can personally do to increase the quality of his life directly. It’s the organizations working in these communities who have taken on that responsibility. Organizations like BRAC, the ICDDR, B, USAID, and UNF among many others. That really was the purpose of our trip, to learn about the work these organizations are doing and to see actual change taking place, as slow as it might be in some cases.

While his question may have been about the people sitting there in that circle, I think my experience in Bangladesh makes me understand that this is a question about everyone. How I can help those in my own community? What changes can I make in terms of how I live my own life?

I have a lot of work to do.

So, last night we got word that a certain project was moving forward, and the timing could not be more perfect. Yahoo! wants to team up and donate a large sum of money to the charity of my choice. I’d love your help in deciding where this money should go, since you are the ones who read my stories. Since you are the ones who enable me to tell other people’s stories.

I’ve asked a question in my community to get some ideas. I’ll decide on a charity by next week and let you know what I’ve decided, and when we do donate the money I will let them know it’s from all of us.

Thank you guys so much for listening.

This post is part of a two-part series sponsored by Yahoo! Yes, I know it’s sponsored, but I do not want to pass up the chance to donate this kind of money to a worthy cause especially since I just so recently witnessed the change that can happen.

Every time someone clicks here to make Yahoo! their homepage, they’re showing their support for my charity.