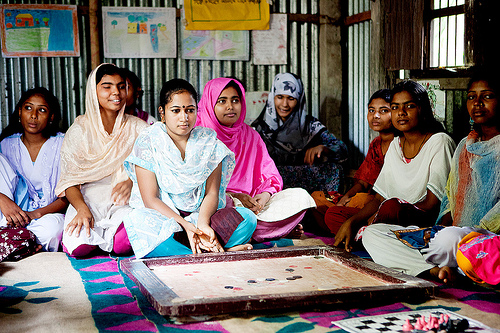 One of the most significant impressions I took away from the time I spent in Bangladesh is the giant divide between the silence of young girls and the brilliant, almost piercing voices of older women who have been empowered. For the first few days the contrast left me disoriented until over and over again I witnessed just how patriarchal their culture still is.

In 2000, about 50% of women in Bangladesh were married by the time they were 15 years old, and in 2003 the average age of marriage was 16. Many of them immediately become pregnant (adolescent girls are five times more likely to be injured in childbirth). Many of them don’t finish school. Many of them do not know that they can change their future.

Our days in Bangladesh were packed and frenzied. We usually climbed into our van by 7 AM and did not finish our day until 11 PM. We visited slums, villages, hospitals, clinics. It was really easy to get discouraged by what I saw, because the poverty stretches out and does not ever stop. And we met many teenage women living in villages who were pregnant with their second, maybe third child.

The highlight of the trip for me happened on our third day when two women who work for BRAC took us outside of the city to see a girls program called SoFEA (Social and Financial Empowerment of Adolescents). We met with a dozen or so girls in a village, all between the ages of 11 to 18, who have a building where they can gather every day for a couple of hours to work on projects, perfect skills that can land them jobs, and learn that they have options. That they can delay marriage. That they can finish school. One girl spoke up and said she wanted to run a beauty shop. Another wanted to work with computers. And then another coyly mentioned that she’d love to be a model.

For the first time on our trip I saw hope in a young girl’s eyes. It was also the first time I heard a young girl speak with what I will call Bangladeshi conviction. Just imagine 150 million people — that’s half of the population of America — all crammed into a space the size of Iowa. They have to stake their place, and the conditions in which they do have given them a strength I can only aspire to.

So when you’re having a conversation with someone, they will be heard. You will listen. Especially if that someone is an educated woman.

On our final day we got stuck in infamous Dhaka traffic for almost five hours and ended up being several hours late to an appointment we had to meet with The Family Planning Association of Bangladesh, a member of International Planned Parenthood Foundation. Once we arrived we toured the facilities and then were shown to a packed room where over two dozen women were waiting to speak with us. They had waited for us, and they were ready to talk. All these women are volunteers who work tirelessly in their community to educate women about family planning, and all of them had that Bangladeshi conviction. Especially a few of the women in the front of the group who were so eager to share their message with us that they frequently yelled over each other. Why do they do this without compensation? Because the work is so important to them. Because they had been given the chance at a better life and wanted to pay that forward.

I don’t know how many of you saw the skirmish that played out this week between me and a journalist who implied that I was a “poverty tourist,” and that Christy had given me a free trip to an exotic country. Yes, we were popping back martinis and assuaging our white guilt by feeling really sorry for the poor people. That journalist quoted my website and twitter feed, so she could have contacted me and asked about my trip without publishing assumptions or implying that my trip was ultimately meaningless.

The truth is that I paid my own expenses. The truth is that this is just the beginning for me, and I plan to get more involved wherever I can, wherever it is the best place for me to get involved. If a reputable organization wants to use me, I am here for the using.

And then a certain blogger who has been antagonizing me and members of my online community for years jumped in and started mocking my intentions. She started publishing false assumptions. And when I saw the language she was using, the flippant way she wanted to wave this off and turn it into something ugly, I had an imaginary conversation with those women sitting at that family planning clinic in Dhaka.

You see, yes, a corporation wants to work with me to give a large sum of money to an organization like the one you volunteer for. Yes, someone is making fun of me over this, publicly, and inciting others to make fun of it. What? No, I can’t say anything. Because I have to take the high road. It’s an unwritten code of conduct that I and many of my colleagues cannot stand up for ourselves. We have to remain silent and take it because they have the “right” to publish lies and twisted assumptions about us because we are semi-public figures. If we do say anything, if we ask those people to stop lying, to stop spreading their parasitic negativity, then we are the ones who are wrong.

And I can guarantee that if I really did speak Bangla, those women would tell me that this is the most insane thing they have ever heard. How desperately the women in their community would like to have the luxury and privilege of standing up for themselves. So I stood up for myself. I stood up for the other women in my community who have had to be silent when their name and causes were mocked mercilessly. I stood up because it’s not just a luxury and a privilege anymore. After meeting those brave women in Bangladesh, it’s now a duty.

So, no. In so many ways, this trip was not meaningless.