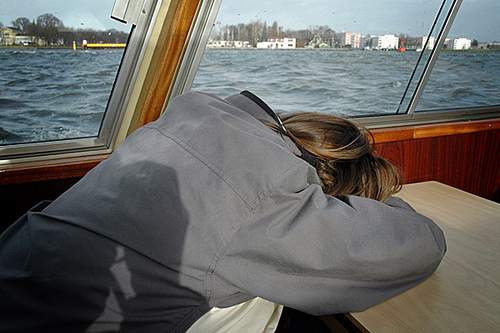 One of the things I was really scared about before heading to the other side of the world was the prospect of crippling jet lag. Sure, there are three different kinds of mosquitos over there and each carries a different disease, and you know, POSSIBLE DEATH! But in the days leading up to the trip I kept thinking maybe Jon will let me borrow some of his Adderall.

Is that illegal? Probably. And if so then they need to start arresting entire college campuses.

Also, I was prescribed Adderall once by a doctor who I later found out diagnoses every patient with ADD, and HOO-BOY! Want to know what speed does to someone who suffers from chronic anxiety? About five hours into it I had the distinct feeling that stabbing someone would be pleasurable.

That wouldn’t be a good mood for someone visiting a developing country where she doesn’t speak the language.

So, Adderall. Not an option. Off the table. Speaking of which, my last experience with jet lag was when we visited Amsterdam in 2006 and Jon took a picture of me with my head on a table on a boat in a canal. At noon. I don’t even remember falling over like this, it just happened. When the ride was over and Jon nudged me awake I felt so disoriented that I started to hallucinate. But not the good kind of hallucinate. Not the kind where happy leprechauns are singing hymns and everything tastes good. The kind where you start to believe that you’re on a world-wide most wanted list, but you forgot what crime you committed.

Jon hates this show, and I was talking to him about this before the trip trying to remember if I had ever seen an episode where someone tried to smuggle drugs out of Bangladesh. And he was all, WOMAN, if you get to a foreign airport and even think about joking about this show out loud, I WILL NOT COME TO YOUR RESCUE.

Message received, BUDDY. So during our layover in Abu Dhabi I most certainly did not turn to anyone in our group and say, “This marijuana I have taped to my torso is itching like crazy!”

I was really surprised by how well I handled the adjustment when we got to Bangladesh, especially considering they are exactly twelve hours ahead of Utah time. Also, the total travel time was about thirty hours. I think it mostly had to do with the schedule, though, because that first day was packed. We didn’t have time to think about how tired we might be. Which I think is key to battling jet lag.

Because when you get back from a country on the other side of the world and your second layover in New York is extended by an extra three hours because of delays, an extra three hours with nothing to do but read a book, you might start to feel like an anxious person who is abusing Adderall. I almost described this feeling to the man sitting next to me in the terminal who was telling two Mormon missionaries returning from Russia that Obama and his socialist agenda have destroyed the country while they were gone.

P.S. I’ve looked over all your suggestions for charities and I’m getting some good advice about some of them from people who know more about this than I do. I should have a decision made by tomorrow. Thanks to you all!