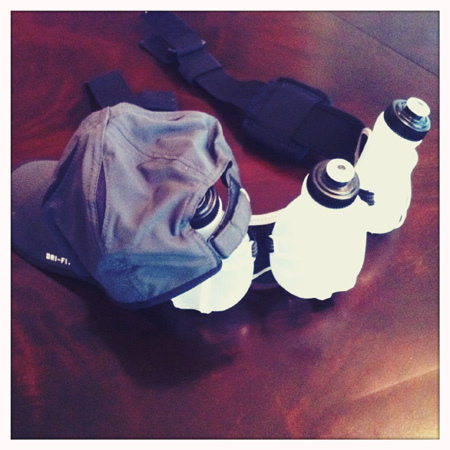 Saturday morning I voluntarily got out of bed at 5 AM to go for a run. “Go for a run.” HA! Ha ha. That sounds so innocent. So sweet! If it had a nose I’d pinch it and then rub it on its head while gushing WHO’S THE CUTEST LITTLE GUY WHO?

My training regimen said I had to run 13 miles. Pretty much a half marathon. And since that would take over two hours (THE HELL?) to complete I had to get a head start so that I didn’t get caught in the heat. So I strapped on all my gear, so much of it that I might as well have been headed to the moon, and slipped out of the house into the pitch black of the morning. How fucking poetic is that?

Finding a path in this town that doesn’t involve giant hills is pretty much impossible, and Saturday morning was no different. I hit a steep patch at mile seven, so I slowed to a walk and took advantage of that moment to eat a goo. Do you know what those are? Goos? They are pretty much what comes out of Satan’s ass when he empties his bowels.

No, no. You’re a runner who has found a goo that’s really tasty and you want me to know about it. No. The chocolate one, right? I tried that one. Satan poop.

At mile nine I turned my body off. I didn’t want to listen to it anymore because I had to hear every second of the four miles ahead of me. And then at mile ten I realized my fatal error: in order to get back to the house I’d have to run three miles straight uphill. DAMMIT, UTAH. You and your gorgeous scenery.

After several more blocks the GPS told me I’d gone 13.18 miles. Half marathon complete. But when I stopped running my legs almost collapsed. My body switched on, and oh, the pain. Lightning and glass shooting up though my ankles into my butt. When I looked around to see where I was I realized I had to walk a half a mile home. Uphill. And that was the longest, most excruciating half mile I have ever walked. I know, the Mormon Pioneers are not impressed.

You runners are total nutballs.