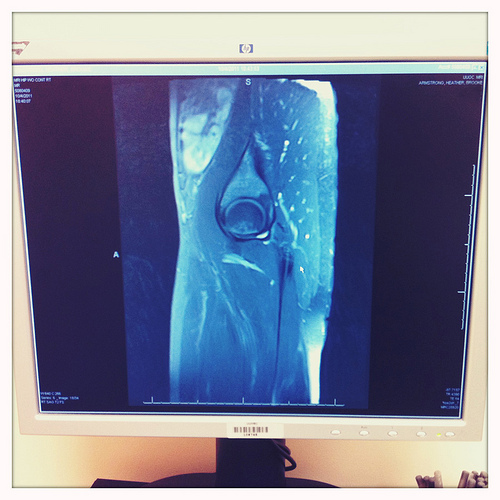 Egad. Wait, is that supposed to be plural? EGADS. Whatever. Maybe I should just end this sentence with ten exclamation points to express the same thing!!!!!!!!!!

Six days ago I got up really early to go for a five-mile run. My right hip was a little sore from the five miles I had run two days earlier, and then an hour later I tried to take my clothes off to hop in the shower and realized I couldn’t lift that leg. SERIOUSLY, RUNNING?! You are harshing my mellow. Do I have to remind you that I’m not 90 years old? AND EVEN IF I WAS this is how I’m going to do 90:

I had trouble walking for the rest of the day, and then the following morning when I showed up to the gym to work out with my trainer I had a hard time holding back the tears. So gross. You don’t cry in front of your trainer, dude. You know what you do in front of your trainer? You break rocks in half with your bare hands and bench press a piano. And then you take a giant swig of gasoline because you are that fucking tough.

She could see the pain and anger in my face, and after I explained what had happened we spent the next hour doing pilates to try and lengthen my sore muscles. I asked her if I should run ten miles the following morning since that’s what my schedule required, and she was like, oh my god, how have you made it this far in life being so stupid?

I’m usually sore after running, but that soreness goes away after about a day. So Saturday morning I expected to get up feeling much better only to collapse as I tried to get out of bed. Same thing Sunday morning. The pain started in my butt and exploded down my hip and into my thigh. Both days I stretched, rolled on a foam roller, iced, and popped enough ibuprofen to sedate an elephant.

There is no more ibuprofen left in the world. I took all of it.

Monday morning I showed up to spin class and my trainer took out a gun and hit me in the back of the head. Look, I can’t run, but spinning doesn’t irritate my hip! Fine. I’m addicted to endorphins. Withdrawal symptoms include CRYING IN FRONT OF YOUR TRAINER.

The entire spin class gave me all sorts of advice. Someone knows a guy who knows a guy, etc. And that’s when my trainer pulled me aside, took me by the shoulders and said, “You are going to see an orthopedic surgeon. Tomorrow morning, 9 AM, check in at the south entrance.”

Ladies? Guys? Are you looking for a hot piece of ass? Leave the bar and head immediately to an orthopedic clinic. That place was crawling with young, lithe athletes. Yes, they’re injured, but not forever! Just avoid the “come here often?” line because that would be insensitive.

After two sets of x-rays, one for my back and one for my hip, the doctor and his assistant confirmed that it wasn’t a disc issue (THANK GOD), but they couldn’t rule out a stress fracture. So I’d need to schedule an MRI. Ooh, fun! This NYC marathon is crossing off so many things on my bucket list! See: being trapped inside a giant, deafening machine emitting a nuclear magnetic field.

The clinic had an opening last night, and when I showed up and started to fill out the paperwork I paused when it asked if I ever suffer panic attacks. HAHA! Panic attacks. Me? Nahhhhh. Wait, those four days I spent in the psyche ward? That was ANXIETY. Don’t look at me, paperwork. You’re the one getting into semantics.

I hadn’t been apprehensive about the MRI, because come on. How bad could it be? I pushed a baby out of my vagina. Twice. TRUMP CARD. But once I was strapped to that board and wheeled inside that tube I started to FAH-REAK out. I have no idea why, maybe because it was just such an unnatural state for a human to be in. Well, a living human. Totally normal for a dead one.

Knowing that I wasn’t supposed to move I tried to shorten my breathing, but that just freaked me out more, and then in my head I was screaming LET ME OUT! LET ME OUT! However, I did not show any outward sign of distress, no. Because I was going to prove to the technician that I was the valedictorian of MRIs.

He was going to go home to his wife and say, “You would not believe the patient I saw today! She was the calmest person I have ever wheeled into that machine! It was like, having MRIs is her job!”

I wouldn’t see my doctor until this morning, so I had an entire night to imagine all sorts of horrible things, the worst one being that I’d have to drop out of the marathon. I know, it’s not cancer or starvation or unemployment. There are far more horrible things in life. But the idea of having to sit out that race, especially with all the mileage I’ve put in already (73 miles in four weeks), especially since it’s with such a fantastic team for such a worthy cause… I felt like someone had punched me in the gut. But there was no fracture. There was no break. Everything looked perfectly normal except for the inflamed muscle there around my right hip. Was there anything they could do for it? He was so glad I asked! Yes! I’d just need to drop my pants and stick my butt in his face so that he could inject it with a shot of cortisone!

You guys, I gave birth to my children in front of multiple people. Not a big deal. But sticking my bare butt in a stranger’s face? It’s just not the same without tequila.

I should be up for running in a couple of days. EGAD.