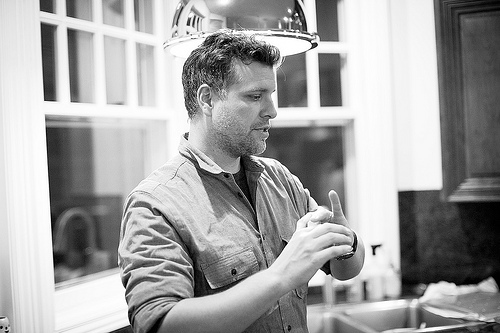 Saturday night I hosted house guests plus a couple of more friends for dinner. Well, let me back up a second. Pardon me if my brain seems addled, I’m a bit dehydrated from watering the bathroom floor with my eyes. If only it were covered with plants!

My friends Ryan and Cole from Florida and Maggie crashed here during Alt Summit. Ryan is great friends with photographer Jason Hudson who also happens to be a fantastic cook. So we called him to tell let him know he’d be cooking dinner for six adults. I was like, listen. I don’t know you, but think fast, hon. If I write about this you will be judged, and considering what’s been said about me in the last week the Internet will hear about what you cooked and if they don’t like it they will accuse you of botoxing your entire face.

THE CONNECTION IS SO OBVIOUS. Once I write about it YOUR FACE IS FAIR GAME. Ryan and I picked him up from his hotel and hit a grocery store to pick up ingredients. Problem is Ryan had his own ideas about what a good meal on a snowy Saturday night might look like, and Jason? Jason has his own ideas about everything. Including the idea that Ryan is always wrong.

The menu we showed up to shop for changed four times before they both agreed on pork roast, and as we were checking out Jason pulled me aside and asked if people ever recognize me around town. I said sometimes, usually after I’ve worked out and am looking like a herding dog who has rolled around in the snow, yes. And now that the local news has covered Recent Happenings, how scandalous is it that I’m grocery shopping with two strange men?

As a favor he snapped three times, waved his arm dramatically and pretended to faint. “Well, then,” he said. “Let me really gay it up for you.”

(Jason is gay so he is allowed to to gay it up. Don’t be mean to him. Also, he doesn’t botox anything. Except maybe his enemies.) You guys would never believe the meal he put together. It was like a Thanksgiving feast just whipped out of thin air: pork roast with rosemary, a green bean salad, mashed potatoes, and apple chutney. A FEW THINGS: Ryan and Cole threw together a signature salad that trumps any salad I’ve ever eaten, so I have to give them credit for that part of the meal. I don’t want them to read this, see that I didn’t mention the salad, and then FedEx me the severed finger of one of my close relatives.

I may have referred to it as apple chutley all night but only because I want to live next door to a Chutley who shovels the snow in his bathrobe and slippers while holding an unlit cigar in his mouth. A much needed good time, and I’m so lucky to know all these people. It feels really good to take photos again.