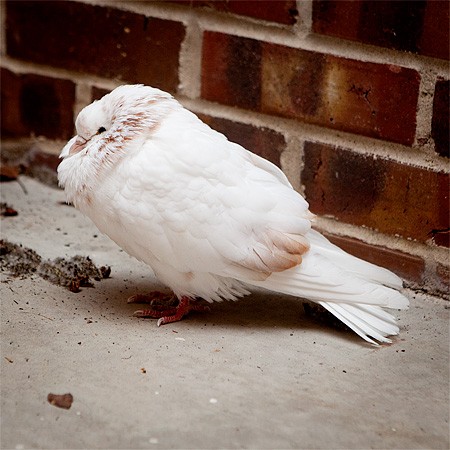 Do you believe in God? Karma? What about witches? Ghosts? How about signs? Do you believe in signs? I’m sorry, do I need to give you more time to think? Is it none of my business? Have any of you answered out loud yet? Nodded? Shrugged? Sent me a Facebook message telling me to reconnect with my Lord and Savior Jesus Christ?

(You probably wouldn’t be surprised by how many times that has happened. Hint: many of my Facebook friends are Southern and religious. So, visiting Facebook is like visiting the Lord’s website. And he is so pissed!)

Last night Coco was sitting next to one of the glass panes flanking the front door—it’s her new favorite place to practice her crazy—when suddenly out of nowhere she started barking so hard I thought her jaw might fall off. I was in another room, assumed it was a person or a dog walking by the house, so I ran into the foyer and pulled her away from the door. I may or may not have called her a few nasty names while doing so BECAUSE THAT ALWAYS WORKS.

I’d love to see a collection of video clips of the useless, reflexive and profane yelling that owners of herding dogs do throughout the day. And how we always think, THIS time she heard me.

I let my guard down for two seconds and she was right back next to the front door barking (“I just called you a total shit! Did you not take me seriously?”) so I ran back to the foyer, made her sit, and then I looked out onto the porch to see what was making her so deranged.

Let me clear my throat for just a second because I suddenly have an impulse to tell you that I believe in witches.

Sitting at the far edge of the porch was a relatively large white bird. The only white bird I have ever seen in Utah is a seagull. This was not a seagull. And it was just sitting there, eerily still, staring at the front door. I immediately ran up to the office to grab the camera and a memory card hoping that it would still be there when I got back. And it was.

So, let me talk this through for a second. A white bird that I have never seen in Utah is sitting on my porch and neither Coco’s deafening barking or my rapid shutter clicking causes it to fly away. WHY ARE YOU HERE, BIRD? Ghosts are supposed to talk to me through appliances, NOT WILD ANIMALS.

Oh, no. Do I believe in ghosts? If you’re a ghost and you’re reading this, can you leave a comment? Oh, wait. You can’t because your fingers would just float right through the keyboard. WE WILL NEVER KNOW.

I walked back into the house and, after letting out an involuntary shriek, I called Tyrant. Yes, he’s evil and would pull a prank on Hellen Keller. However, he grew up with chickens and might have an idea about why this WHITE BIRD I HAVE NEVER SEEN IN UTAH is just sitting there on my porch. And he probably doesn’t want to be exposed like this, but there is a large beating heart in that man’s chest. And sometimes? Sometimes he has thoughts about things other than torturing me.

But he wasn’t answering his phone, and while I left a message I looked out the window and watched that white bird walk HOLY SHIT up to the welcome mat and sit not two feet from the front door.

A white bird. Sitting on the welcome mat. At my front door. You just started to believe in witches.

Coco’s brain was leaking out of her nose at this point, so I had to take her upstairs and put her in her crate while I figured out what to do. OKAY. One: putting a dog in a crate is not cruel DO NOT EVEN GO THERE. Two: Of course I had to do something! There was a white bird sitting at my front door! What if it was someone’s pet? What if it was the spirit of my dead Uncle Doug? What if it had a little note tied around its ankle containing the exact date and time of the rapture? (Oh, the bragging I would do on Facebook.)

So I called Animal Control, and this is where I am gifting you screenwriters your next scene, because I’m sure the woman put me on speaker phone so that she and everyone else could laugh at the idiot freaking out about a bird.

“IT’S SITTING AT MY FRONT DOOR!”

“And you’re concerned because?”

“BECAUSE? BECAUSE?! Haven’t you heard of the Book of Revelation?!”

She told me they didn’t handle cases like this (ANIMAL CONTROL IS NOT CONCERNED WITH THE END OF THE WORLD), so she gave me the number of the highway patrol and this is getting more ridiculous with every letter I type. Highway patrol. High-way. Pa-trol. Let me just quote what it says on their website: “Our current area of emphasis is to reduce crime and crashes through proactive policing.” And I’m supposed to call them about the bird on my porch.

“Hey, guys! Listen. I know you’re currently on a dangerous, high-speed chase with a drunk driver, but I’ve got a fucking bird staring the shit out of my front door.”

Luckily Tyrant called me back and said he was out with friends and could come check it out in about an hour. So I did what any sane person would do and sat down next to the window pane and spent some quality time with my special white bird. At this point it had wandered over into a corner right next to the window and would look up at me every time I tapped on the pane. It knew I was there.

I fought the nagging instinct to pick it up and bring it inside where it was much warmer, so you can stop worrying that I did something stupid like that. You would be more than justified thinking that I’d do just that, pick up and cuddle a bird that could potentially be carrying a disfiguring disease. We all know my brain is full of Skittles. But I thought of my children and decided that it was nice not having them in a hospital.

When Tyrant finally showed up, the diagnosis was sadly evident. The bird was really sick. So sick, in fact, that it didn’t even flinch when he picked it up and set it inside a cardboard box we’d lined with a small towel. I said a final goodbye before he took it away, before he googled some key words about sick birds, hit a store for medicine and supplies, and tried to keep it comfortable for the night.

It was dead before morning.

A strange white bird chose my doorstep as the place it wanted to spend its last few hours alive. I just wrote 1,200 words about it, but damn. I am so not ready to think about it.