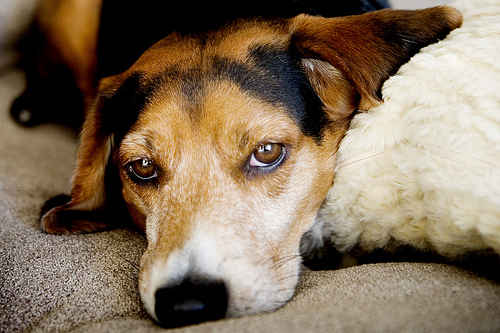 I’ve said this before, but whenever we watch my sister’s dog Bo for a few days, we’re reminded of how much our dog really isn’t a dog, or at least how dogs can come with such disparate personalities. Over in this corner we have Bo, a walrus with legs, a snuggler, a barker, an absentminded ding-dong. And over here is Chuck, a neurotic gazelle, listens to music written by men who wear mascara, prefers that you wash your hands before touching him, reads Hemingway. I think the scene that sums up their differences perfectly is yesterday morning in bed, I turn over to find Bo lying next to my head on my pillow. He senses I’m awake and immediately rolls over to show me his belly, like SCRATCH IT, SCRATCH IT, YOU KNOW YOU WANT TO, DO IT, DO IT, his tongue lolling happily out the side of his mouth, his tail beating the bed rhythmically as it wags in anticipation of everything the day before him has to offer, like maybe a leisurely afternoon of butt-sniffing. If he could speak English he’d ask for a Miller Lite.

Chuck has wandered into the room silently hoping we haven’t noticed and aren’t suddenly overcome with the desire to pay attention to him. The only reason he is here is because he has heard The Small Human stirring in her room, and if we don’t do something soon it will start to make that noise. I pat the bed, tell him to hop up, but he doesn’t move. I pat the bed again, this time more convincingly, and he turns his head disdainfully to acknowledge my effort. He is here to escort us to the kitchen area of the domicile, would we please gather our belongings and follow posthaste?

My sister came to pick up Bo last night, and after she left I noticed that I had Bo hair all over my shirt. It made me stop and listen to the sudden silence in the house, because when he is here every moment is filled with the noise of his body. He is a companion animal, a dog who wants to be with you all the time, will look at you as you get up to walk into the other room like, are you going over there? Because I could go with you, no really. It’s no problem. Here, let me walk right next to your legs, and when you stop I’m going to stand right underneath you and stare at you until you give in and notice once again just how adorable I am.

And because his legs are so short, because he is so fat that his belly rubs against the floor as he walks, there is this constant buzzing hum of having a dog in the house. What is that noise? That’s Bo, existing. What about that one? That’s Bo running down the stairs, although I know, it does sound a lot like someone just rolled a giant tree stump into the basement.

But then there’s silent, moody Chuck who could very easily get lost in all this noise, because he doesn’t demand anything, doesn’t want the attention. He is such a good dog, so obedient, so long-suffering, and I realized after Bo left that if we had another dog, especially one as loud as Bo, that we might not notice all the low-volume yet fantastic expressions of who Chuck is. Like how he’s all, dude, step away, we talked about the touching.