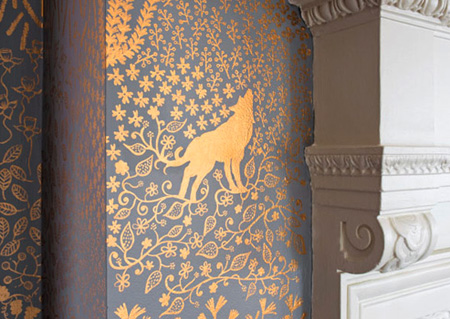 I was immediately inspired by the idea of meticulously painting an entire room in my own freehand style. I decided to create something that looked at first glance to be wallpaper, but on closer inspection became apparent to be a non-repeating painted design.

Bon Iver is treating my bee sting with a home remedy. (Hint: kisses.)

– For all the Hamiltons and Armstrongs: Meanwhile in Scotland…

In an adaptation from his new book on the rise and fall of NBC’s “Must See” TV, Warren Littlefield, the network’s former president, presents an oral history of its 10-season ratings juggernaut, learning how the stars’ characters were shaped, their lives altered, and their hearts a little bit broken.

If you’re a snob about Friends just shut it.

– I lost a whole damn hour to this. I would have lost more but I didn’t put “Ryan Gosling” in the search box.

– It’s a crime that there are only 48 seconds of footage of this.

– Cami and I will be watching this all weekend: Askin’ All Them Questions,﻿ makin’ statements, asummin’?

– The Geek Shall Inherit the Earth, an interview with Avengers director Joss Whedon:

If you can watch it on television and it’s good, it’s got writers who wrote for him.

– I’m speaking my truth and spreading the word, because it does get better:

When my deviance didn’t disappear, I weighed the possibility of suicide, sure that it was the only option for someone so soul-deep sick. I felt as though God had denied me as his child, and I wrote the note that would explain my death as a kind of gift to those whom I was sure my deviance was hurting.