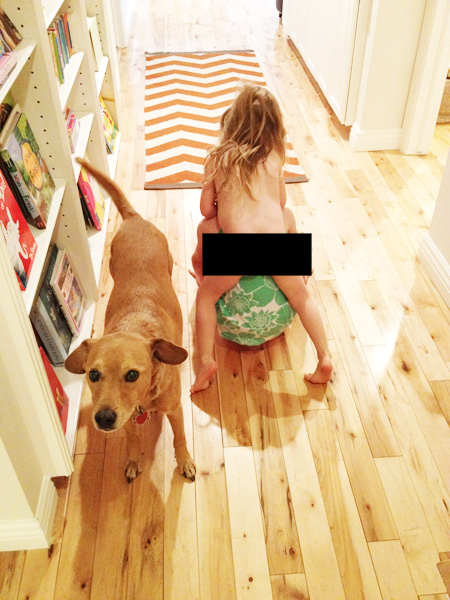 So this happened this morning:

(In several years Marlo will find out that I posted this photo on my website and be enraged that I covered up her butt.)

I found out a couple of days ago that my best friend from high school is getting married in the fall. I texted her congratulations, and because she avoids all things Internet-related she wrote back this morning to ask how I was doing. I briefly summarized the last several months of my life with mentions of the rattlesnake, the dead bird, and the crushed retaining wall because I thought, “Super!” would have been too vague.

Three seconds later she called me (kids, that’s when someone wants to talk WITH THEIR VOICE).

I haven’t seen her in two years, so we caught up a bit. She kept expressing sadness for what’s happening in my life, and while I kept assuring her that it was okay I suddenly realized that it’s okay. I had just brushed Leta’s hair while she screamed that THE TANGLES! WERE HURTING! and Marlo was right underneath us, the top half of her body inside the sink as she made a horrible gagging noise. She was playing “throw up.” When I was a kid I played house. Times change. Things change.

Piggyback ride, naked kid, dog wagging his tail. I have a new mantra and wallpaper for my phone.

Dawn, I know you won’t read this, and even though I told you this earlier I wanted to say it here anyway: I’m really, really happy for you.