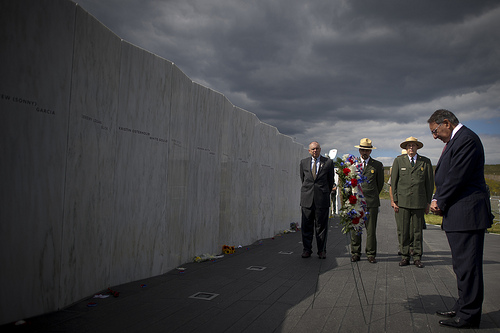 Vice President Joe Biden commemorated 9/11 in Shanksville, Penn. today. Before running the transcript from the speech he gave, Talking Points Memo contributor David Kurtz talked about the side of Biden that makes him “cut him a lot of slack for his sometime inexplicable goofiness.”

But at 30 years old to lose your wife and baby daughter, to almost lose your two toddler sons, and to somehow carry on? It truly baffles me. I know everyone says you do what you have to do. But that’s not really true. You don’t. You could curl up in the fetal position, if not literally then emotionally, and shrivel up. I’m more certain that that’s what I would do than I am confident I would find a way to persevere. But Biden has been through it. He’s seen hell and been back.

That he served his entire 36-year Senate career after that searing experience in December 1972, shortly after winning election, and then went on to become vice president, adds some drama to the story, I suppose. But for me the emotional highlight is just him getting out of bed the next day, and the day after that, and the one after that.

You should read the speech. And then go hug your children and call your mom.