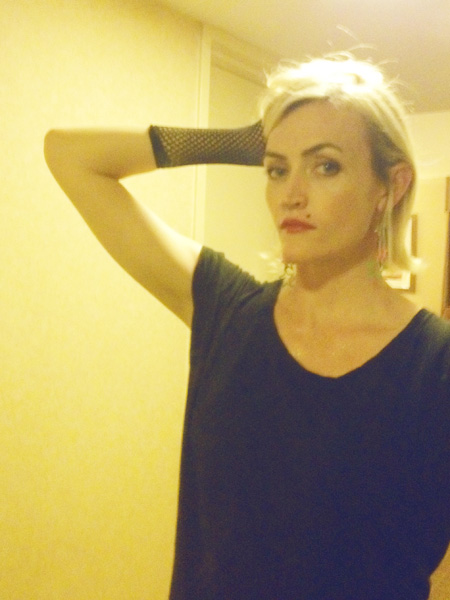 So it turns out I’m not a pink tights/black tutu kind of person. Tuesday night as we were dressing up for the concert I was really wishing that Madonna had gone through a yoga pants/loose-fitting blouse/minimal make-up phase because I could not bring myself to leave the hotel room dressed like a rapidly aging hooker.

I did wear a pair of fingerless gloves and leg warmers to jazz up a pair of shorts and a black t-shirt, but that’s as far as I could go. I just cannot get into a costume. It isn’t fun for me. In fact, it makes me so uncomfortable that I start to panic, and once the other women realized how serious I was they backed off and were like, FINE. Be a watered down Madonna.

If you think about it, though, isn’t a watered down Madonna kind of refreshing? No? Then you are more than welcome to borrow the pink tights and black tutu while I am over here not having a panic attack. I just figured out that dressing up in a costume is a trigger for me, so if you want to see me completely lose my shit, hold a gun to my head and hand me a clown suit. I would gladly ask that you shoot me.

Here’s the thing: I decided to identify and then draw that boundary, and because of it I was able to have a good night. Plus ten points for my mental health.

The other women totally went for it, though, and I admire the guts and skill with which they pulled it off. Standing ovation.

Heather took the survey and it determined that she was Disco Madonna:

Both Cami and Stacia were Blonde Ambition Madonna:

You can imagine that every single person in that arena wanted to get their picture taken with these women. They could barely walk two steps without being mobbed. It was spectacular.

Yesterday Leta asked who I went to see in concert and I told her it was a woman whose music I had been listening to since I was her age. I doubt that in Leta’s 37th year of life she will be able to say the same thing, and that broke my heart a little bit. Unless I am totally underestimating the longevity of Katy Perry’s career, and if that’s the case I hope she gets to go see her with a group as fun as this one and dance along to “Teenage Dream” with memories of when she was eight years old and belting it out in the backseat of the car with the windows rolled down.