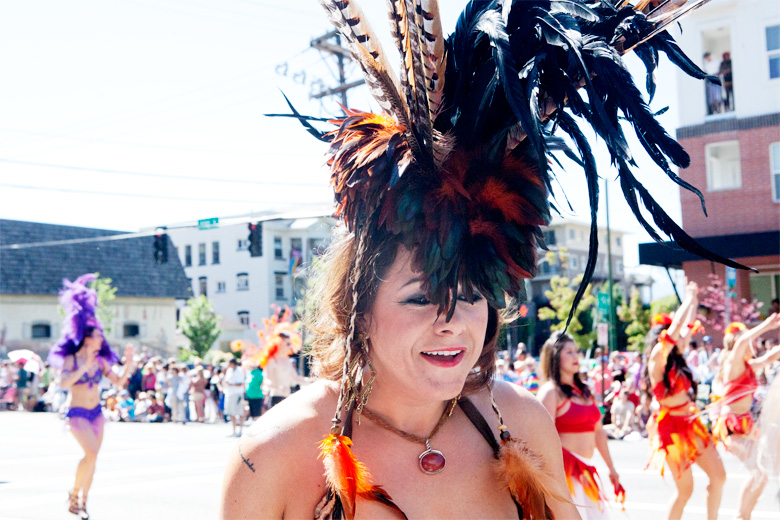 Saturday afternoon I was sitting at my desk working on a list of projects when Leta called my phone. She and her sister were with their father, and it’s always a little startling to say hello and hear my nine-year-old’s voice on the phone. Maybe it’s because she’s old enough now to have a meaningful conversation, whereas for so long she either wouldn’t say a word or like Marlo would jabber endless nonsense. I have a feeling that when Marlo is older people are going to see her name on their phone and think, “Oh god. There go the next two hours of my life.”

“I was just thinking that I wanted a play date tomorrow with my friend. Can we do that? Can you call her mom?”

I had planned to take the girls to the Utah Pride Parade on Sunday, and Leta’s friend’s mother had mentioned that they were going to be participating in it.

“Well,” I answered. “We’re going to a parade in the morning, and I know your friend is going to be there. I’ll text her mom and see if we can meet up.”

I have been so damn swamped that I’d forgotten to mention to her that we’d be attending this event, and this was a conversation I wanted to have with her in person. It deserved more than a two or three word explanation.

“We’ll talk about it tomorrow when I pick you up, okay?”

This seemed to satisfy her which was my triumph of the day: she wouldn’t spend the rest of her afternoon panicking about tomorrow’s boredom. You know what’s worse than first world problems? LITTLE KID PROBLEMS. Boredom? UGH. All of the pink bowls are dirty? NO. STOP. THAT CANNOT BE. You’re letting HER push the buttons in the elevator and not me? I HATE YOU.

The following morning when I finally found parking a few blocks from where we had planned to meet up with our group, I turned to the backseat and got Leta’s attention. I asked her if she understood what it meant to be gay and the extent of her answer was, “John and Dane. They are gay.” I had to pull out some real life examples of women who are attracted to men and vice versa, and then explain that some men are attracted to men, some women are attracted to women, and some people are attracted to both. And then there’s Morrissey.

“But why is there a parade?” she asked.

“Well, some people don’t think that it’s okay for women to be with women or men to be with men. And this is a problem because in most states gay people cannot marry the person they love.”

I wanted rainbow confetti to shoot out of my ears when she asked that question. Because I did not know a single gay person until I was sixteen years old, a very good friend of mine who was terrified that when she came out to me I’d freak out. I don’t know why I didn’t, I’d been taught that it was wrong, that it was an abomination, that it was a sin she was choosing to live, but my honest, gut response was, what does that have to do with our friendship?

And thus, THE BEGINNING OF THE END OF THIS MORMON.

Here my children are surrounded by gay men. It will have always been a normal thing for them which is why I’m hopeful and confident that their generation will look back on these asinine laws about marriage and think, WTF you stupid old people.

I told her that some people are taught that it’s wrong and don’t want to believe differently. And that this parade was to celebrate the fact that being gay is no more a mark of one’s character than being straight. She nodded and then asked, “Is there going to be candy?”

Utah’s Pride Parade is a lot tamer than some of the parades I’ve attended in Chicago or Los Angeles which goes a long way in terms of not having to cover your children’s eyes when certain cars or floats drive by. Instead of topless women or men in assless chaps you get things like this:

And then, well… then you get things like this:

I did not know that I was going to start bawling right there in the middle of the street, but all of a sudden I was crying hysterically.

Let me back up a bit… some of you are probably thinking, NO. Stop. They cannot repair the damage they did with Prop 8, Heather. And I thought that, too. When Prop 8 passed I decided that I was going to have my name removed from the records of the church, a lengthy, complicated, painful process to have all of my membership records expunged. Except, my mother was in a bad place at the time and I wanted to wait until she could emotionally handle the idea of me taking this step. I wanted to make that distinct stand against the church’s bigotry, but having my name on the records at the time was less harmful that the damage it would have done to my mother.

Since then, the Mormon church has taken some steps in the right direction when it comes to their stance on homosexuality. Is it enough? No. Is it even in the ballpark? Not at all. But at least they are recognizing the fact that this is not an annoying little problem that people can just pray themselves out of, and that homosexuals deserve the love and respect that is due “any of God’s children.”

I’m not going to get into my feelings on God or how much more I think the church should make amends, but I will tell you this: the Mormons in that parade are the ones I wish more people had experiences with. I wish more people associated “Mormon” with people like my mother, with people like my brother and sister, people who have accepted and loved me despite all the ways I live and the choices I make that violate the rules of their religion. Maybe that’s why I had such an emotional reaction, because here were these Mormons saying, “I will not shun you for being you.”

These are the Mormons who are living the true spirit of the religion: generosity, compassion, service. I hope you have read about the love my family has shown me in the past year and understand that there are so many more of them out there who would show that kind of love and service to ANYONE who needed it. Some of the finest people I know in this world attend that church, and even though I cannot pick and choose who gets associated with my membership records, the idea that my name is any way in line with those who are living the fundamental principle of being a good person has been enough to make me pause when thinking about having it removed.

That and the gun my dad keeps in his sock drawer.