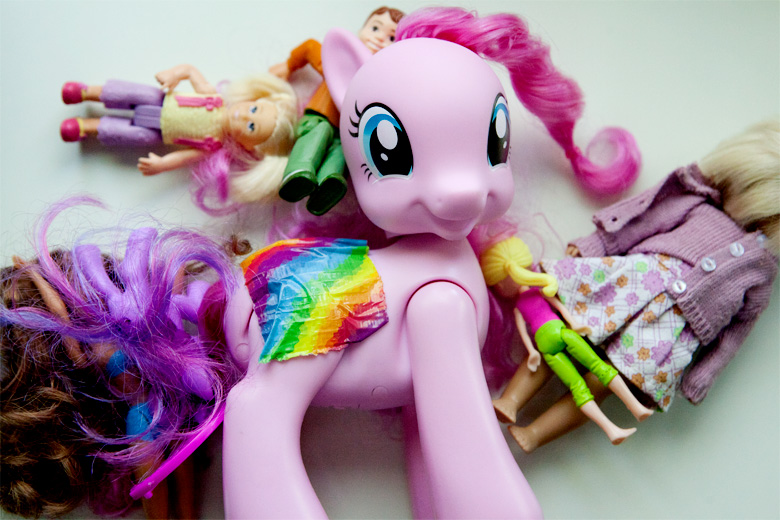 Recently my dad came for a visit, and while he was here, I commented on Twitter —

Okay, I’ve been using Twitter for six years now but I still can’t make myself say tweeted. I just can’t. I wrote a thing on Twitter. I said on Twitter. I know those sound just as awkward, and refusing to adapt to the vocabulary accompanying new technology is a slippery slope down to snooty dinosaurville, or just hopeless, like when my grandma used to leave messages on our answering machine that went, “[long pause] This is Essie, Dale’s mother. Please tell them that I called,” like we had an electronic butler, but man. Tweeted. Ugh. —

Anyway, I wrote a tweet (baby steps!) that said “Have spent the past 72 hours with just my dad and my husband. Living on the edge of a constant baby/honey/daddy slip-up.” And then I immediately followed up with, “Yeah, I call my dad Daddy sometimes. I also played with dolls as a child. I’m not a holy princess terror, so fuck off already.” I don’t know why; I keep my Twitter account friends-only, and I’m not friends with any dillholes, so why did I get so defensive? I am a 36 year old woman, and sometimes I call my dad Daddy. It’s just a term of endearment. We have a healthy relationship, one where we share jokes and discuss books and say I love you, and I never demand any convertibles or Oompa Loompas.

And (-Andy Rooney voice-) why is it considered so taboo or lame to have played with dolls as a kid? It’s such a trope to prove that a female character in a book or movie is cool by showing some flashback to them as a child, and all they did was tear the heads off their dolls or something. I completely understand the righteous backlash against the pink princessification of the toy aisle, or ridiculous contrived gender crap like “Lego for girls!” but why the doll backlash? Playing with dolls was awesome. You were a god.

I had Barbies and Smurfs and Strawberry Shortcakes and Star Wars figurines, china dolls in velvet Victorian clothes from my grandmother, antique Madame Alexander dolls that were the four sisters from Little Women, a few G.I. Joes, a Michael Jackson doll, a Brooke Shields doll, and the cheap plastic dolls that came with my cousin’s hand-me-down uber-70s split-level ranch dollhouse. I played with all of them, usually at the same time, and typically involving story lines lifted from the most recent episode of “Little House on the Prairie” (oh, how many times did my dolls go blind as a result of a fire?). And humping. Lots and lots of humping. People who were too cool to play with dolls, how else did you fulfill the need to simulate weird plastic sex at a young age? From my Effanbee International Dolls of the World to Brooke Shields in her gray leggings and mauve turtleneck, if you wanted to drive the Barbie Jeep, it was ass, grass or gas, but predominantly ass. The late ’70s/early ’80s were a heady time.

For some reason, I would make my Barbies do it, then toss them aside. I owned several, but hated them for being so blonde and fake, so I kept the juicy storylines for other dolls. I guess I understood the concept of the hatefuck at an early age.

Not that all my doll-playing was sexual. I also spent a lot of time setting up their houses, making tiny sofas out of Lego and folding Kleenex for a blanket. I played with dolls as a child for the same reason I played the Sims as an adult: sex, death, and elaborate floor plans. You could put me in front of a dollhouse right now and I’d go straight to work rearranging the furniture and not come up for air for an hour. In fact, my friend Danielle and I have already decided that our old lady hobby is going to be Being Really Into Dollhouse Miniatures, and I am looking forward to spending my golden years in air-conditioned convention centers, wearing comfortable shoes, spending $55 on teensy grandfather clocks made in a 1:12 scale. Actually, I’m not sure why I’m not already doing this now.

I almost wrote “it’s not like I spent all my time playing with my dolls’ hair or anything,” which although unfair is true; it took a long time for the perks of personal grooming to really make themselves known to me. I never took a brush to my dolls’ hair, but then I never took a brush to my own head until (this is true and kind of embarrassing, get ready for it) the middle of seventh grade, and even then it was because my mom forced me to. I was like Unfrozen Caveman Lawyer with a round brush, and didn’t know you were supposed to start at the ends and work your way up, so I ended up in tears, hairbrush tangled deep in my scalp. I imagine at that moment my mother had a flash of “Oh dear god, she’s still going to be living at home when she’s 40,” but eventually I got the hang of it and moved on to more sophisticated concepts, like Hot Sticks.

I think, at the end of my life, results will show that I really excelled at being a child and an old person, and just sort of dog paddled through being a teenager and adult. I’m okay with that.