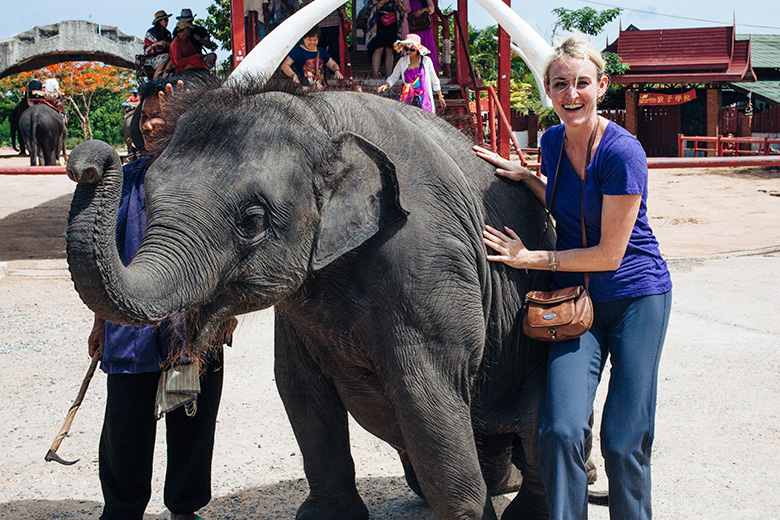 I mentioned previously that in the weeks leading up to my trip to Southeast Asia (which now seems likes eons ago) the other women and I had active conversations with each other about what we were going to see and experience. We also talked a lot about my butt.

Many thanks to those women for giving my older child a reprieve from that riveting topic. She owes each of you a card.

Laura Paker of the Exodus Road often jumped in to give insight as to the logistics of our schedule and mentioned that we’d have some downtime. She asked if there was anything in particular we wanted to see or do, and Jamie Wright said something about… wait… let me go find the exact email because this will help tie this story together in the end… oh, here it is:

I WANT TO SEE AN ELEPHANT THAT’S WALKING AROUND IN THE STREET LIKE IT BELONGS THERE. You know what I mean? Like an elephant that thinks it’s a donkey.

I didn’t capitalize those words, she did. Obviously, Jamie and I are pretty much on the same page when it comes to emphasis. However, I’m sure I’m far more guilty of overusing it. I bet there are more caps-lock sentences on my website than in all of the Facebook accounts of 85-year-old great grandmothers who have no idea how to turn caps lock off or think that people won’t be able to hear them unless they scream.

I thought Jamie was joking because where in the world do elephants walk around in the street? I’ve seen them in zoos and roaming a variety of habitats in Africa, but in a street? On purpose? Surely you are high, Jamie. Surely you stole someone’s Adderall, hopped onto email and are now screaming about urban elephants who are also so high that they think they are another animal.

I could not wait to spend six days with that woman.

We here are familiar with my experiences when it comes to wildlife. I attract it or they attract me or I was cursed in some previous life, but what’s the count now? Raccoons, birds, possums, mythical bobcats, squirrels, rattlesnakes, black widow spiders, strange dogs and frogs. I don’t have a link to my encounters with possums because both incidents happened before I started this website when I had first moved to Los Angeles. Possums? Possums walk the streets. Possums walk out into the middle of busy intersections (first encounter) and hide in the garbage can that sits next to the dryer in the shared laundry room of your apartment building (second encounter from which I still have not recovered).

On our fourth day in SouthEast Asia after visiting Thrive Rescue, we were driving to lunch when suddenly someone, I don’t remember who it was, pointed out the window and said, “Stop the car, there’s a baby elephant right there.” And oh my god, you guys, THERE WAS AN ELEPHANT WALKING AROUND IN THE STREET LIKE IT BELONGED THERE.

Emphasis entirely mine. Except, entirely not. Jamie is, like, a magician.

I have always loved elephants, used to collect elephant figurines when I was a kid, have always headed straight for that particular exhibit at the zoo. And here was a baby elephant walking down the street beside our car. My mouth went instantly dry, and you could see my heart pounding in the veins in my neck. Some strange visceral reaction was taking over, so by the time we’d all hopped out of the car I was on the verge of tears. I was the first person to approach it, and its owner? Handler? I’ll just call him “the dude chilling with the baby elephant.” He saw all of our cameras and pulled me over to have my photo taken with it.

Part of my visceral reaction was this crazy but totally serious thought I had that I was going to scare the poor animal to death with my hair. It was so hot and there was so much humidity in the air that I could not tame it or wrangle it or get it to stop jutting out and frizzing. The animal might see me approaching and think some towering, lanky monster with yellow corkscrews sticking straight out of its head was coming to skin its hide.

Thank god I handed my big camera to Laura Parker who snapped off the following shots. IT SHOULD BE NOTED FIRST, HOWEVER: What started out as a casual photo of me sitting on the knee of a baby elephant turned into, well, how do I even try to explain this? First, visceral reaction. Second, the dude chilling with the baby elephant physically moved me so that the elephant was standing behind me. I had no idea what was going on, and could only gauge by the reaction of everyone else and the sensation on my shoulder that the baby elephant was putting its mouth on my body.

But what you see is not panic, no. That look on my face is not distress or anxiety. Is it maniacal? Absolutely. But more accurately, that look is, “I did not know that being nibbled by a baby elephant was on the list of things I want to do before I die, BUT APPARENTLY IT HAS ALWAYS BEEN AT THE TOP.” I couldn’t tell if he was trying to kiss me or eat me, and if it was the latter, I thought, what a way to go!