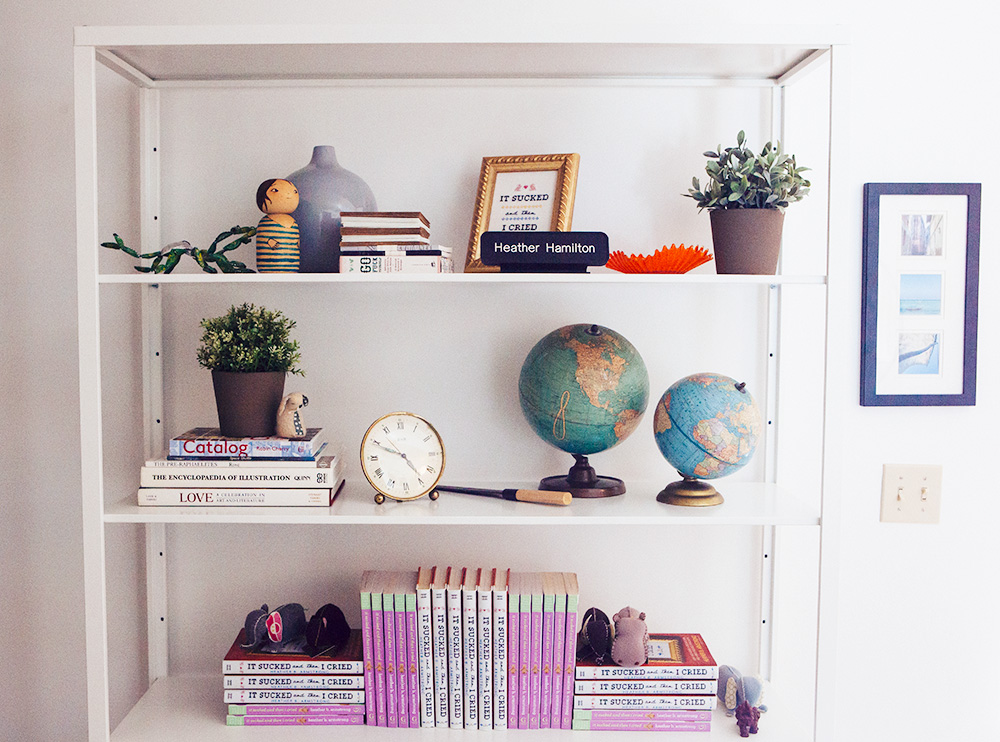 Last October I began in earnest what would become a three-month project of clearing out/rearranging/organizing… wait. Did I say three month? HA! HAHA. No. Nope. It is still going on, that project. Still reaching up from out of nowhere with a fleshy tendril to whack me in the face with a giant bin full of Leta’s 2nd-grade artwork. That is totally meaningful and teeming with memories! What? Of course, I’m going to keep all of it. Right until I throw it all away.

(Mom, where is all of my 2nd-grade artwork that you saved for me? OH, RIGHT. You fed a family of dumpsters for a week with it.)

I had a room in my basement stacked from floor to ceiling, wall to wall with shit (there is no other word that adequately expresses what it was) I’d collected over the last 10 years of running my own business. Just… all that stuff you collect: folders of paperwork and files and old hard drives and newspapers and shipping envelopes and that box filled with copies of The Notebook on DVD (at least 20 of them [what if one went missing, and then another, and then ONLY 18 LEFT?! NO. I will not live like that.]). I donated as much of it as I could and then drove three SUV-sized cars filled with everything else out to the Salt Lake County Landfill where I sorted everything into their recycling dumpsters. That’s right. I recycled it. To offset the fact that publishers have routinely been sending me books packaged in enough cardboard to kill whatever trees are left in Peru.

This leaves me with one more room, the place where I put everything that needed a more thorough examination than this:

Me: *takes not even a cursory glance at the contents of a folder of paper* *actually doesn’t even open the folder* *okay, fine, barely picks it up to toss it in a bag* “Trash.”

This room is full of Very Important Documents (legal and otherwise), bank stuff, camera stuff, special items readers have sent me over the years, and bin after bin after bin of the girls’ schoolwork—

Wait. Let me stop you right now. You do not need to send me a copy of The Life-Changing Magic of Tidying Up

. Nope! Nu-uh! I’ve read enough of it to know what I need to know. Which is that I do not want to continue reading it.

No offense to the author or to those whom it has helped. I’m just not a fan of someone saying to me, “If you don’t do it my way then you will fail.” No one has ever relapsed into disorganization after hiring her or using her method? Show me the science, GINA. Except you can’t because anyone who has relapsed into disorganization is hiding it right before you come over to inspect their clutter/most vulnerable part of their personalities.

There I said it.

P.S. Did she really suggest in that chapter over there that *children* will absorb the “magic” of tidying up through osmosis? Oh, honey. Your book fell in to the hands of the wrong mommy blogger.

At some point I will get to those bins of artwork (according to my work schedule, sometime in 2018), clutch a portrait Leta painted in 4th grade and ask myself in earnest, “Does this bring me joy?” And then I’ll feed a dumpster for a week.

The workspace I have set up in the house sits in a basement room with two large glass doors but gets very little light, if any at all. I started this project so that I could get to a place here in January where the room would be filled with light (I’ve installed approximately 200 lamps around the room), have shelving filled with some of my favorite books and have artwork hanging on the walls. I’ve documented some of the progress in Instagram:

I’d love at some point to have a full gallery of the whole room as it has turned into by far my most favorite home office yet. I love working down here, even on days when it’s hovering around 21 degrees outside and I can’t keep the house warm. Those are the days when I work with my entire body wrapped in an electric blanket, my whole torso hunched over my keyboard toward the monitor in case I can absorb heat from it, too. I’m sure I look like some turtle a kid has found in his backyard, and out of curiosity wants to see what it would look like if he sat it upright.

The shelving unit in the giant photo up top sits in a very dark hallway, its only light source coming from around the corner. So yes, those are fake plants from IKEA. Judge all you want, they will never die. Unlike everything else that is important in our lives.

Everything here is something I’ve collected over the last 18 years I’ve worked online, including the vintage globes, the Japanese chef’s knife, the antique clock, the framed cross-stitched cover of my book (thank you, Julie Jackson), and the nameplate from my first web design job in Los Angeles in 1999 featuring my maiden name which some of you may associate with me more than the name I currently go by. But then, I guess it could say “Raving Lunatic” or “Self-Absorbed Moron” or “Bottom Feeder” and you would know exactly who it was referring to.