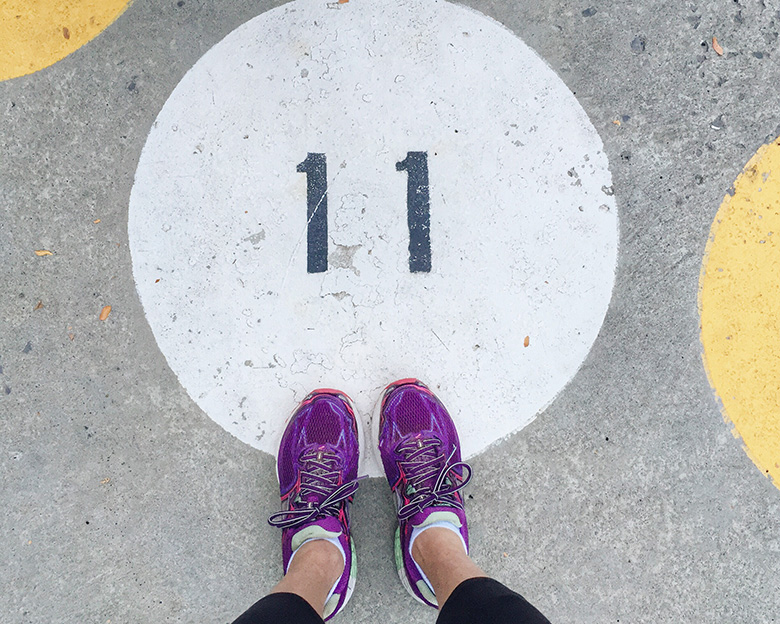 Monday marked the beginning of week number six of my marathon training schedule, but because I choose and enjoy and revel in doing things the hard way I completed the long run that day and not this weekend. You already have so many questions, I know, sorry! Like, wait, a full marathon? When did this happen? And a long run on a Monday morning? And will you promote my new app on your mommy blog website?

You guys. The app emails.

(Yes, this is a tangent, and no, I haven’t been taking my meds OR HAVE I. I’m going to let you decide for yourself since you were going to do that already. [You do know that I know better than to go off of my meds, right? You don’t? Okay, good. You having trust in me would make things easy and that is not the example I want to show my kids. If people are always a little bit scared that you might bite them, then you have learn how to make it seem spontaneous when you eventually do. Basic people skills.])

I appreciate that you’ve developed an app and have spent the last three years of your life and all of your savings doing so, I do. That is a lot of work and requires more dedication than the average person can summon. However, every single day at least a dozen people write me an email detailing this exact scenario. As much as you need funding and marketing and promotion, I think you’re in as much need of a support group. My greatest value here would be suggesting a good social worker (I happen to know/have employed/have funded the yacht collection of quite a few).

First: yes. A full marathon. The whole 26.2 miles. From here to the fridge and back a couple of times. To grab a hot dog.

Second: I’m going to try to give you the shortened/cheater’s version of this story, but when did that ever happen?

I had the once-in-a-lifetime opportunity of running a half marathon in Tanzania last March with ultra-marathoner Scott Jurek and and his wife Jenny on a team representing Every Mother Counts:

Scott treated our whole team to a mini-clinic the day before the race and imparted tips for long-distance endurance that I have followed to the letter ever since. I would then take our relationship to the next level at mile 10 of that half marathon when he’d already finished and was running back into the field of participants to help each team member make it to the finish line. He did that. He finished the half marathon, and then the man basically ran another full marathon running everyone else in.

Not because I’m special, no. Not in that way whatsoever. I am not special. I may bite you, and it will get infected. That is all I have to offer.

I never finished the piece I was going to write about that race, but if I had you would have learned that I did not train past six miles. And I never trained on anything but a treadmill. Because I was mildly injured and in total denial. Yep! I am nothing if not prepared. FOR DISASTER. This makes me a model Mormon, let me explain: Mormons are convinced that the Second Coming of Jesus Christ is imminent and will bring with it the end of the world, right? Be careful and do not get “The Second Coming of Jesus Christ” confused with “climate change” or “the potential election of Donald Trump.”

Because of this Mormons pride themselves on what’s called Disaster Preparedness. They have a room stocked with food and water and supplies, enough to last at least a couple of weeks before the zombies tear through the walls and eat them. When you buy a house in Utah there’s always one weird room tucked away that looks like a place you might keep someone you’ve casually kidnapped and plan to murder. That’s where you store all the dry beans!

Usually, when it comes to me and running races… I am disaster prepared. I have no idea which bone I’m going to break, but I’ll have paid all my insurance premiums! And, whoa, have I got a diverse collection of frozen ice packs! There is no room for Leta’s prepackaged burritos in the freezer because Mama may come home from Africa unable to walk.

When I come back out of these tangents, you guys, I have to gather my whereabouts… and good lord WE ARE IN TANZANIA! At the base of Kilimanjaro! And Scott Jurek is… running in the wrong direction?? Why was he running back into the field of participants? I really couldn’t focus on that detail because every molecule of blood in my body was focused on not dying. I’d hit a brick wall so hard the mile before that it came crashing down on top of me, and despite the suffocating humidity and 95°F temperature, I was covered in chills. I learned later that this was NOT due to the fact that I had just listened to my favorite Kanye West song while running a race in Africa (I HAVE NOT EVER TYPED A WHITER SENTENCE IN MY LIFE), no. My body was desperately and dangerously trying to cool itself off. My body, it’s a prepared Mormon.

I would use this knowledge to aid the apology I issued to Scott that afternoon when I’d recovered. Because when he approached me there at mile 10, I distinctly remember the doctor tapping my hypnotized body to say, “It’s time to push,” and waking up to the reality and pain of Marlo’s head peaking out of the birth canal. I was in labor. He was that doctor, and mile 10 was Marlo’s huge, bald noggin.

He must have recognized the abject despair in my expression when he asked (now running backward as I tried to propel myself forward), “Hey, are you okay?”

Your guess is as good as mine as to what the hell came out of my face in response to that perfectly appropriate question.

All I know is that I became a primitive human being. I regressed to my most basic animal instincts. And I wanted nothing more than to be left alone. It might have been a string of profanities. It could have been a crude imitation of Chewbacca (I’m betting on this one). I may have mimed slitting my own throat. I have no recollection of how I specifically responded to him, only that it was to communicate: “I AM A DANGER TO EVERYONE INCLUDING YOU RIGHT NOW.”

After bonding with his wife Jenny over one (okay several) highly inappropriate images on my phone over the next few days, I think he may have heard whatever it was that I groaned and thought, “Wow, is my wife ever going to hit it off with this one.”

Last year Scott worked with an organization called Team With A Vision and guided an athlete who is visually impaired in the Boston Marathon:

Team With A Vision is comprised of runners with visual impairment as well as sighted guides and fundraisers from all over the world who run the Boston Marathon each year to prove that “disability” does not mean “inability!”

When TWAV started looking for potential guides for future races, I think my casual association with Scott appeared on their radar and they reached out to me over twitter. Thanks, Scott, for not warning them about mile 10! Also, let me just take a moment to say, good god, twitter. Thank you. I can barely keep up with the number of ways you have changed my life. Yes, I am speaking to twitter as if it is a living, breathing entity. It’s the way I talk to all the voices in my head.

After a little bit of back and forth with Andrea Croak who works with the Massachusetts Association for the Blind and Visually Impaired, I downloaded an 18-week Hal Higdon training program, bought some new shoes (the very kind woman who helped me pick out the best fit took a look at my old shoes and said, “Don’t take this personally, but that’s a lotta holes for one shoe.”) and have dedicated myself to this race like I have to no other. I’m doing the training right this time, working up mileage week by week. Because someone is depending on me, and I take that responsibility very seriously. Almost as seriously as my butt. Almost.

On April 18th I’ll be running the Boston Marathon alongside Simon Wheatcroft who in 2014 ran from Boston to New York City and then competed in the New York Marathon. Simon lost his sight at age 17.

This is a man who is reaching in and gathering every ounce of the life he has on earth. I have so much to learn from him.

I am honored and humbled to be a part of this team and cause. I know how lucky I am that my platform has opened up countless opportunities to expand my business, and because of that I feel an obligation to use it for a commitment like this when it lands at my feet, in this instance both literally and figuratively.

Without fail when I tell people that I’m training to participate in this, that no, I did not qualify to run the Boston Marathon (ARE YOU INSANE?), that I’m there only to give a hand to an athlete who happens to be visually impaired, the response is, “Really? I had no idea that anything like this existed.” Awareness is always the first step in forging change.

You can read more about Simon on his fundraising page.

I will also be writing more about him and his journey, and will throw out some updates on my own training regimen as the race draws closer. Which brings me to the question, “Why are you doing your long runs on Monday mornings?”

Children. I have to take care of my girls every weekend, so I run when they are in school. I could pay a babysitter to come by when I’m out for a leisurely 16-mile jog, or I could say, “Leta, you’re in charge. Before Marlo burns down the house make sure you’ve brushed your hair.” I will instill an appreciation for priorities in that child, so help me god.

Instead, I’m using that time to stick my wet finger in Marlo’s ear rest my legs and spend time with them.